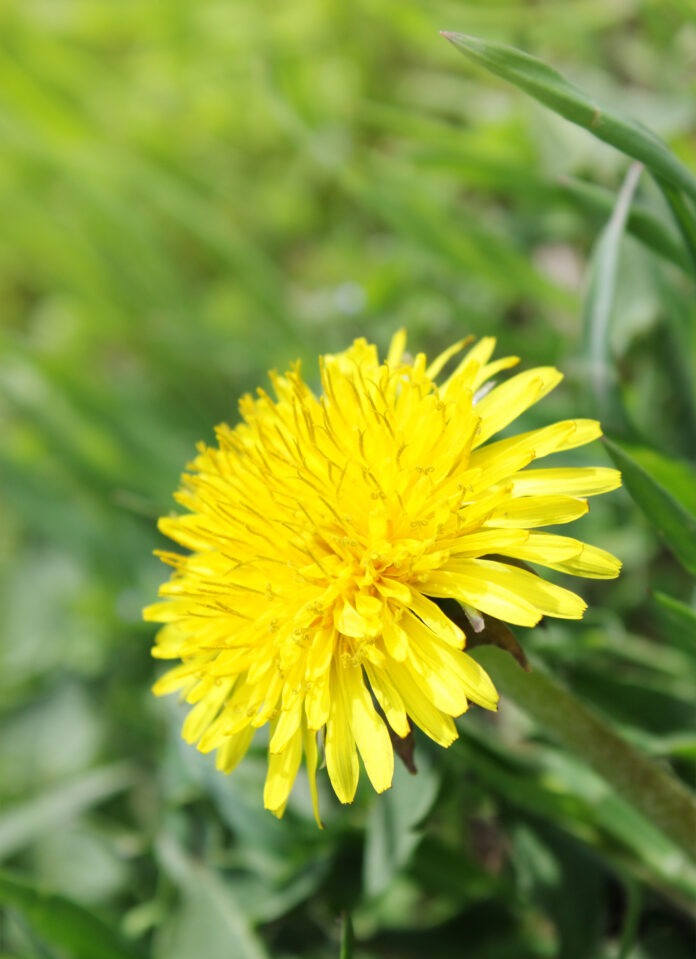 Ahh, the sun!!! We know spring is here when that great big, yellow ball appears in the sky earlier each morning and lingers later each evening. After a long winter, most everyone wants to spend time outside in the presence of Mother Nature’s gifts. Walking, biking, gardening, and even yard cleaning is more enjoyable when there’s sunshine and fresh air, fragrant with the smells of flowering trees and plants. A real treat for me is to go for a walk at night, when the aromas are the strongest, breathing in nature at its best.

There‘s also another bright yellow explosion that arrives to announce the coming of spring. Perhaps you can guess – the harbinger of spring is the dandelion! You cannot miss this familiar plant in Michigan. With audacity, the dandelion pops up everywhere, across meadows, hillsides, and most noticeably across manicured lawns. As predictable as the sunrise each morning, scores of people scrounge for their arsenal (i.e. expensive poisons) to disrupt the dandelions’ glorious parade year after year.

Many view the dandelion as if it were a personal enemy, and take great efforts to eradicate it. For these people, childhood memories of the days when bracelets, necklaces, and other charms were made from the golden crowns are long gone. Do you remember making a wish while holding a dandelion that had gone to seed and watching the little parachutes disappear in the breeze?

How do you feel about dandelions? Do you love them or hate them? Perhaps you don’t like the thought of weeds ruining your beautiful grass but secretly love the pretty yellow flowers. Are you ready to change your thoughts about dandelions?

You may change your view of them when you learn why dandelions are so special. The Chinese herbal usage of this plant dates back to the 7th century. Known by the Chinese as Huang-hua-tii-ting, or yellow flowered earth nails, the dandelion is one of the six most important plants in the Chinese herbal medicine chest. Chinese medicine advises that we should cleanse our bodies every spring and fall. Mother Nature provided the perfect gift for spring cleansing by giving us the dandelion.

For centuries, dandelions have been revered throughout the world for their medicinal and nutritional values by at least 40 different cultures and nationalities, including the English, Greeks, Koreans, Pennsylvania Dutch, and Southern Appalachians. Known as “Ciccoria” in Italy, the dandelion is added to salads, eaten with beans, included with spaghetti, on pizza, and baked into bread. In fact, it is almost considered the Italians national dish.

Considered to be gourmet fare by the French, dandelions are called “Pissenlit.” This name reflects its ability to work as a potent diuretic and the reason why it is not recommended for heavy sleepers before bed. Reference to the deep, ragged leaves as “dent de lion,” or lion’s tooth, led to the name of what we commonly call the dandelion.

What makes this plant so remarkable? Nutritionally, the dandelion ranks ahead of broccoli and spinach (U.S. Department of Agriculture Handbook No. 8’ Composition of Foods). According to The University of California School of Public Health’s “Wellness Letter” [Feb, 1990], dandelions are nature’s richest source of beta-carotene which the body converts into Vitamin A. Unlike synthetic Vitamin A supplements, beta-carotene is non-toxic in large doses because the body regulates its conversion to Vitamin A.

Dandelion is rich in fiber, potassium, iron, calcium, magnesium, and phosphorus, as well as the B vitamins, thiamine and riboflavin. Studies in Russia and Eastern Europe, reported in Hobbs [1985), indicate that trace minerals and micronutrients including copper, cobalt, zinc, boron, and molybdenum are found in dandelion as well as the all important Vitamin D (BMS Guide Magazine, March 2010.)

The dandelion contains a perfect balance of trace elements, minerals, vitamins and other substances [Hobbs, 1985]. The ideal ratio of the elements found in the dandelion may be the reason it provides such an exceptional source of nourishment. And similar to the interpretation of lab test results, ratios are superior to the actual numbers.

The potassium, magnesium, and calcium in the dandelion help regulate blood pressure, helping reduce the risks of stroke. The iron helps to prevent anemia, helps carry oxygen in the blood, and helps reduce fatigue.

Other important chemical components of dandelion include pectin, Apigenin, Luteolin, Gallic acid, Linolenic and Linolenic acid, and Choline. The pectin assists with both blood and gastrointestinal tract detoxification and has been prescribed in Russia for removing heavy metals and radioactive elements from the body. It can help lower cholesterol, especially when combined with the Vitamin C also found in dandelion.

Apigenin and Luteolin are flavonoids with anti-spasmodic, antioxidant, and liver protecting properties that help strengthen heart and blood vessels. They are also anti-bacterial and anti-hypoglycemic. Gallic Acid is anti-diarrheal and anti-bacterial.

Join in the celebration of health and life and enjoy one of Mother Nature’s springtime gifts. Look into the secrets of natural healing and find out what people the world over have found to be helpful. Most of the best recipes and remedies are not new. They’ve passed the test of time and survived –just like the dandelion.

If you pick your own dandelions, you must find a good clean source to avoid any potential toxins that can be absorbed into the plant. Another way to enjoy dandelion anytime is by trying a product we enjoy called Dandy Blend, a delicious instant beverage made with 630 mg of dandelion and chicory root per cup, a great coffee substitute. Other sources include organic salad mixes with dandelion leaves, and dandelion root and dandelion leaves in concentrated liquid form, or in capsules, supplements, or tinctures. I recommend that you consult with a qualified health care professional before using concentrated herbs. Stop by my office to pick up some Dandy Blend and to see Dr. Peter Gail’s book, The Dandelion Celebration A Guide To Unexpected Cuisine.

Dr. William H. Karl, D.C., is a Brimhall Certified Wellness Doctor with almost 30 years of experience, an extensive knowledge of the human body, and a keen interest in applying new and advanced techniques – all of which enable him to provide the finest care possible for each and every one of his patients! To read other articles, learn about techniques used in his office, sign up for a free monthly newsletter at: www.karlwellnesscenter.com or call 734-425-8220.