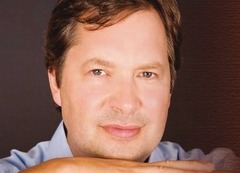 U.K.’s Mind-Body-Spirit Expert, Richard Lawrence, has written and spoken about UFOs and Extraterrestrials for decades. Chrissie Blaze finds out more.

Over the years, you have talked about and promoted the whole subject of UFOs and Extraterrestrial Contact in many countries of the world. This is not an easy thing to do since so even today this subject is controversial. How have you kept going?

It’s made me stronger. You have no choice but to stand up for what you believe in when you stand for something controversial. I do remember in the 1970s, when I was just out of university, you would get heckled from the audience and that makes you develop bravery and courage which I think is step one for a spiritual person.

There has been a change in people’s views. There was a poll out earlier this year (January 2011) and now 65% of people in the U.K. believe in karma and most believe in UFOs and life on other planets. That’s changed perceptions. When I used to talk about government cover-ups years ago, that was controversial. Now there would be a controversy if you didn’t speak of government cover-ups.

It has moulded me to stand up for truth whether you are popular or not.

Have you had any personal UFO experiences?

My friend, John, and I were keen squash players. We played it with such vehement enthusiasm that gym shoes all too often needed to be replaced. One day, I had a simple choice to make – continue to investigate the teachings of The Aetherius Society that I had just found, or play squash in worn-out shoes. I chose the former. I must admit that deciding not to buy a decent pair of gym shoes does not rank among the great sacrifices of history, but it was important to me at the time!

A few days later, hundreds of people in Hull, England, witnessed a cigar-shaped UFO moving very slowly across the early evening sky. John and I, hearing this on the news, jumped into our battered old car and drove to the area where the UFO was reported. Sure enough, there it was, in the sky above – a large, oblong, bright white shape. We parked the car and ran across a field to get a better view. We stood near a large oak tree in the field, watching what we were sure was a UFO. Gradually it became obscured from our vision by the tree. I looked down, and there, beneath the tree, was a brand new pair of gym shoes, my size. I picked them up, by which time the UFO was visible again, and we watched it until it disappeared from view. While I don’t believe the UFO had left the shoes there for me to find, I do believe in synchronicity and the careful interpretation of signs. I saw it as a sign about the overriding importance of the extraterrestrial message, and if you put that first, other things you need will come to you. Since then, I have found that to be true.

Who has been the most influential person in your life?

Dr. George King. He was the founder of The Aetherius Society, a Yoga Master, an outstanding teacher, a contactee with higher intelligences including those from other worlds, as well as being my friend and teacher. I knew him very well. He was just a wonderful person.

Why are you visiting Detroit in October? Following the publication of my book, “UFOs and the Extraterrestrial Message” in the USA, I will be speaking in Los Angeles, Michigan and Toronto. I was invited by the Michigan Branch of The Aetherius Society to give two presentations at their premises in October, which I am thrilled about. They have a thriving Center where spiritual teachings and practices are performed in the most wonderful way, and I am very much looking forward to my visit.

Richard Lawrence is the executive secretary of The Aetherius Society, Europe and Africa, an author and teacher of psychic and spiritual development and meditation. Please visit www.richardlawrence.co.uk and www.aetheriusmi.org

Also tune into Chrissie’s radio show “On the Edge with Chrissie Blaze” on Tuesday, September 13, 2011 – for a live interview on UFOs and The Extraterrestrial Message with visiting international speaker from the UK, Richard Lawrence. Listen at: www.bodymindspiritradio.com or call: 646-378-0378 to listen by phone.