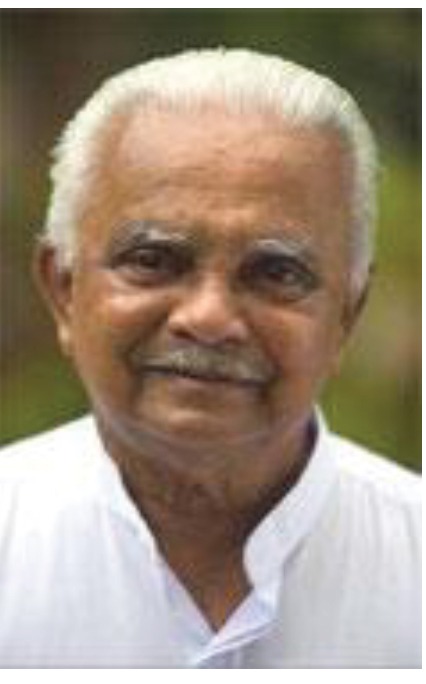 Experiential workshop on “Happiness within” & dialogue with

Born November 5, 1931, Ahangamage Tudor Ariyaratne is the founder of the Sarvodaya Shramadana Movement of Sri Lanka. A former high school teacher at Nalanda College, conducted the first shramadana work camp in 1958, eventually leading the largest non-government organization in the country. The father of six distinguished adult children, he has led tens of thousands of “family gatherings” and meditations with millions of people throughout Sri Lanka and other parts of the world.

The seven volumes to date of A.T. Ariyaratne’s Collected Works provide a comprehensive collection of his speeches and writing in more than 1200 pages. Print and CD versions are available through Sarvodaya USA.

Further comprehension of A.T. Ariyaratne’s additions to the spiritual and intellectual wealth of the world can be drawn from Buddhist Economics in Practice: The Schumacher Lectures, (Vishva Lekha, 1999). A new book on Sarvodaya by Northwestern University Prof. George Bond, will be available in November, 2003 from Kumarian Press.

Bhava Thanha: An Autobiography, Vol. 1, (Vishva Lekha, 2001) offers both a personal and a historical context for understanding the essence of the man and his contribution. Amidst the details of years of humanitarian work, he describes “the Age of Science and Spirituality,” relating it to the purity of means, failures of socialism, imperialism, sectarian violence and other social forces. Fittingly, the book begins with a definition of Bhava Thanha—“the desire for becoming”—and ends with bestowal of merit to others, describing how colleagues, Sarvodaya villagers, and even his opponents influenced his thinking

Oakland County Residents FREE for – My Place – Center for Wellness