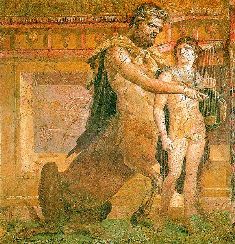 In Astrology, it is a generally accepted belief that a new planetary body is discovered when the collective consciousness of the people is ready for the energy the planet represents. In the late 1970s, the western world was beginning to question traditional ideas about religion, medicine and consciousness. New thoughts abounded, ancient healing techniques and alternative medicine were introduced—and the New Age was born.

The aim of this age, the Age of Aquarius, was to combine Eastern and Western spirituality and medicine with Western thought, to create a new and holistic world view, free from dogma and judgment. The self-help movement grew and encouraged individuals to draw from their own experiences to help others heal. It was within this holistic universe, that Chiron, the “wounded hero” became such an important tool for astrologers to bring healing to others.

Chiron is a minor planetary body with characteristics of both comets and asteroids. It was the first of a group discovered between 1977 and 1997—now known as centaurs because of their dual characteristics. These unusual bodies are thought to have originated as Trans-Neptunian objects within the Kuiper belt that orbits outside Neptune’s path. Astronomers believe that the stronger gravitational pulls of Saturn and Uranus caused these little “planetoids” to move to their current locations between the two larger planets, where they continue to orbit.

Chiron, known to astrologers as the “wounded hero,” represents the individual’s early trauma—a trauma that remains difficult to heal. Chiron’s elliptical orbit falls between the orbits of the last of the archetypal personal planets—Saturn, and the first of the transpersonal planets—Uranus, signifying the new holism and connection between self and community. The lesson of Chiron is to fulfill one’s ultimate potential by first healing self, then using the knowledge gained to help others to heal. How the individual accomplishes this and the nature of the original wound is suggested by Chiron’s position in the birth chart. This energy is similar to that described by Carl Jung in his description of the relationship between the analyst and the analysand.

Chiron has an orbit of approximately 49 years, so the Chiron return—the point at which a planet returns to the exact position it was at the time of the individual’s birth—coincides with the approach of the 50th year, a time when the individual is beginning to move towards the path to individuation, a feat Jung suggests is impossible to be accomplished by the young.

The planetoid, Chiron, is named after the mythical Greek figure, Chiron, son of Kronus/Saturn and the wood-nymph Philyra. It is said that Kronus, son of Uranus and his sister/wife Gaia—the sky and earth—was searching for one of his sons to eat. Kronus, the devouring father and unfaithful husband, came upon Philrya, who thwarted his advances by turning herself into a mare. Not to be dismissed, Kronus became a stallion so he could mate with the unsuspecting Philyra—and a son, Chiron, was born.

When Philrya saw her son, a centaur—half man and half horse—she rejected him. However, Chiron used the lessons learned from being abandoned by both mother and father—his earlier wounding—to become a great teacher, healer and prophet—unlike most centaurs who were known for their lustful pursuits and insatiable sexual appetites.

The immortal Chiron soon became a mentor to Hercules, Jason, Achilles, and Aesclepius—the great healer and teacher, who founded the famed mystery school and place of healing at Epidaurus. However, one day, Chiron was accidentally wounded by Hercules’ arrow—poisoned with the blood of the monster, Hydra, as he had been taught to do by Chiron—leaving Chiron with a wound that would not heal.

About the same time, Prometheus was punished by Zeus for stealing fire from the gods to give to the mortals. Zeus had Prometheus chained to a rock where an eagle came each day to eat out his liver, and each night the liver grew back—leaving Prometheus in eternal agony. The immortal Chiron, who was also suffering from a wound that would not heal, decided to sacrifice himself for Prometheus. Chiron’s selfless act, freed Prometheus from eternal torture, so he could continue to serve the human race. However, Chiron’s sacrifice caused him to lose his status as an immortal, so he died in the service of another—and ultimately for the entire human race, as did Jesus Christ.

Your Earth Sign – Finding True Balance in Your Life