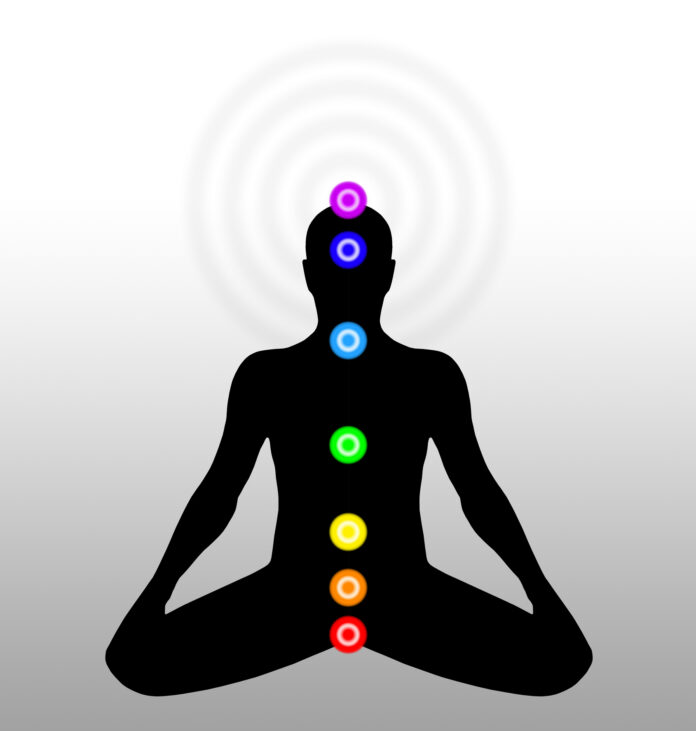 The alchemists taught, “As above, so below;” and “As below, so above.” I learned this important axiom in my earliest days as a healer and have held to this ancient principle ever since. Too many so-called healers have mistaken ideas of how the body should be balanced. If the individual—the healer or the patient—is not connected to mother earth through the root chakra, then it is possible to be walking around so heavenly that you are no earthly good. Of course, the crown chakra should be connected with the God-source, but this chakra is less likely to be ignored.

The body consists of seven primary chakras, beginning with the root chakra—the first chakra which in western tradition is generally red. It governs the physical body, sexuality, the sex organs and the life force, and works best with a strong connection with the earth. In addition to the seven primary chakras, the major joints of the body hold the secondary chakras at the knees, elbows, shoulders and so on, followed by the tertiary chakras at the smaller joints in the finger and toes. All chakras are important to the well-being of the individual but the primary chakras are generally considered the most important.

The second chakra is orange and falls between the root chakra and the navel. It governs emotions or the emotional body according to western beliefs. In other cultures the chakras can manifest differently, so texts may describe the chakras, their colors, positions in the body and their functions differently, yet may be accurate for the culture on which they were based. My knowledge of the chakras is based on my personal experiences and my earliest training.

The third chakra governs the mental body and in the west is generally yellow, often the dominant chakra, and the one that is “seen” since many individuals in the west feel disconnected from their body. They seem to function only with their mind, denying their physical and emotional bodies, which often results in serious diseases.

The fourth chakra is the heart chakra and the one that westerners confuse most often—especially those in the helping professions and many mothers. The heart is the chakra of love and prosperity and is mistakenly thought of as an output chakra. Western religions have preached for centuries that it is better to give than to receive, however, it is important that we open our heart and learn to receive.

The heart is the center of joy, and its lesson is for us to accept love, success and prosperity.

The fifth chakra is blue and governs communication and speech. This is another chakra that is easily afflicted in women who are taught to “hold their tongue” and keep their opinions to themselves. In western culture, women who speak their mind tend to be looked down upon if they do not speak “softly.”

The sixth chakra is the third eye, is purple in most cultures and governs forward sight. Western women use this chakra openly, although they can still be scoffed at. People often call these insights “women’s intuition” as if it were something to be scorned. The lesson of the sixth chakra is to honor the information received and act accordingly, or suffer the consequences of ignoring the messages.

The crown chakra is white and is connected to God, the One, the Universal Energy Source. The lesson here is balance—to not become so overly-dependent upon God, “the Above” such that “the Below” is forgotten. The God source is but one part of the Universal Energy source, the alchemists recognized—As Above, So Below, and As Below, So Above.