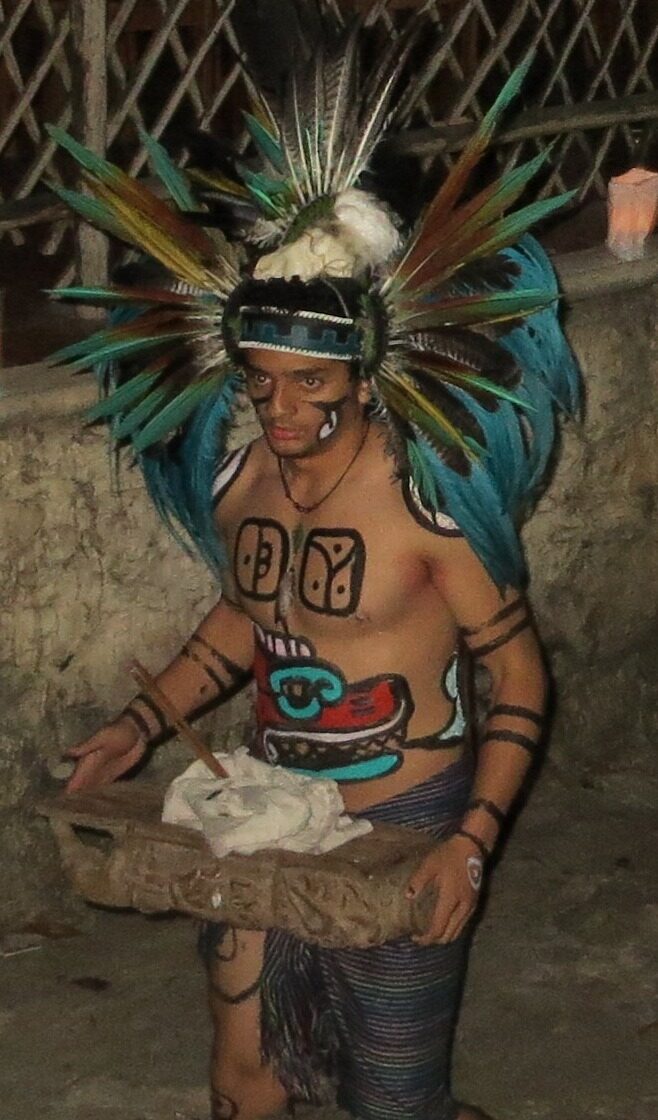 I’ve always been fascinated with the prophecies of our times, including the solstice and galactic alignment of 2012. What it all means, only time will tell. But the power of common held beliefs to unite and elevate humanity is amazing to me, and I was blessed to experience the nirvana of it all on sacred ground at Chichen Itza.

My experience in the holy land of ancient Maya made one thing very clear – the numbers and calculations are of no significance. Our highly anticipated ascension is a spiritual path which each of us must choose to follow and experience in our own way. Although it’s possible for a single event such as this to unify our diverse population, major shifts in global consciousness will not happen overnight. Our best opportunity for rebirth comes from within, and this is what I hoped to encounter there.

So as morning’s first light rose above the great pyramid of the Sun god, where ceremonial fires burned and tribal horns heralded the dawn of a new era, I celebrated the moment in prayer. Unfortunately, I was in my hotel room, as access to the site before usual hours was restricted to those who purchased a package tour. The tourism industry in Mexico has deemed this the “golden” era and quite literally at that. Hotels near the pyramid demanded $800 and up per night (US dollars) for a standard room, and the best price I could find on a sunrise tour were $1,500-US. The outrageous effort to capitalize on such a sacred event was definitely a drawback to anyone who made the journey, but the experience was still nothing short of amazing.

I arrived at the ruins just after they opened to the public, and found myself surrounded with good vibrations and likeminded souls in symbolic white attire. The energy was so Elysian that a feeling of weightlessness came over me, and persisted the entire time I was there. As I admired the majesty of the great pyramid, my eyes filled with tears of joy, knowing what a privilege it was just to be there.

Broken segments of fallen columns made for convenient resting places throughout the grounds. I found one beneath a tree facing a temple, and paused to meditate. When I opened my eyes, I realized that I was alone and quickly tried to snap a photo without any tourists in the scene. But when I looked through my viewfinder, there was a woman standing dead center, looking up as though the temple was still standing tall. Her back was to me, so I didn’t see her face. But she appeared to be Hispanic and was wearing a simple, parchment colored dress cinched at the waist, and a headband in her hair.

I assumed she was a local performer or vendor in traditional costume, and was so annoyed with myself for not having seen her that I pulled the camera away, and … she was gone. I looked in the viewfinder again and saw nothing. After walking the perimeter, I found the historical marker and learned that I was meditating at the temple of the warriors. I realized then that the woman I saw was the spirit of a Mayan squaw, possibly mourning the death of a husband or son, or praying for their safe return. The ghost hunter in me will never stop regretting that I didn’t just snap the picture. But I will always be honored that she made her presence known, and will never forget the experience.

My immersion into the wonders of Mayan culture didn’t end at Chichen Itza. They worshipped many gods, and sacrifices were also made at cenotes scattered throughout the Yucatan peninsula. Today, these natural underground rivers and watering holes are popular sites for swimmers and divers but to the Mayans, they were sacred wells where they sacrificed their own people – mostly children – to gain favor with the god of rain.

In the village of Valladolid, I attended an authentic ceremony at the cenote. At midnight exactly, it began on high ground with prayers, smudge and blessings. Across the lagoon, the entire length of the cave was illuminated with candles. Flames danced in the shadows of the stalactites and shimmered across the water, as the traditional offering of fruit and flowers was lowered down. Tribal drums echoed like thunder, and voices lifted in song. Following a traditional rain dance, the ceremony ended with a dangerous leap of faith by cliff divers into the cenote. Their dive was not a re-enactment; it was a gesture to honor and invoke such virtues as faith and courage whenever darkness is upon us.

Since my return, I find myself no longer hoping for the Sun to chase the darkness away. Instead, I now channel the light in and try to sustain it with my own inner glow. If you ever have an opportunity to travel there, don’t pass it up. You’ll come away enlightened, and have wonderful memories to cherish forever.