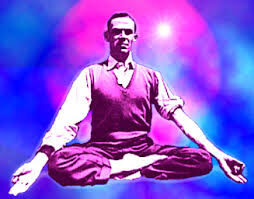 Determined to help humanity raise itself from universal suffering and ignorance, the life’s mission of Spiritual Master George King became apparent on May 8, 1954. Alone in his London apartment, his life and destiny were to change forever. Dr. King was in his London flat washing dishes when he heard a voice, loudly and distinctly informing him that he had been selected by advanced Masters from beyond this world to be a channel for their teachings.

“Prepare yourself! You are to become the voice of Interplanetary Parliament.”

This great revelation became known as “The Command”.

He was initially shocked by the implications of this statement. It came out of the blue without warning or explanation. All he knew with his mastery over terrestrial phenomena was that what he had heard, he had heard.

A few days later he was visited by a world-renowned Yoga Master whom he knew to be alive and active in India at that time. This Master, in every way physical, entered and left through a locked door that he did not open.Dr. George King in Siddhasana

During the meeting, Dr. King was given a series of highly specialized spiritual practices enabling him to bring about a state of consciousness necessary for the establishment of mental rapport with the Cosmic Masters who inhabit the higher planes of other planets.

His Mission had begun.

You may ask why Dr. King was chosen to be a channel for the Masters. It was because he was prepared for this great task. In the previous ten years, Dr. King had become a Master of Raja, Gnani, and Kundalini Yoga – able to attain the elevated state of consciousness known as Samadhi. It was for this reason that the highly enlightened Intelligences of the Solar System known as “Cosmic Masters” began to use him as “Primary Terrestrial Mental Channel”, in order to give their message to Earth.

Also, he had an unusual degree of single-minded determination combined with the courage of his convictions which enabled him to accomplish seemingly impossible tasks. Through his intensive yoga training he was capable of raising his consciousness at will so that he could gain telepathic rapport with these Masters. These are just a few of the reasons why Dr. King was chosen for this mission.
From the moment of the Command all Dr. King’s personal business ambitions were abandoned as the information from the Space Intelligences grew in importance and urgency.

On their direction he founded the international metaphysical organization and Spiritual brotherhood, The Aetherius Society, in England and began publishing the journal, Cosmic Voice. He lectured throughout Britain serving as the channel for numerous Transmissions received from Cosmic Intelligences.

On May 21, 1959, under the glaring lights of the British Broadcasting Corporation, he demonstrated yogic Samadhi over live television so that a Cosmic Master from another planet could speak to Britain. This unique event was broadcast to an estimated viewing audience of several million.

In June, 1959, guided by Cosmic Authority, Dr. King came to the United States of America where The Aetherius Society was founded in 1960 at the American Headquarters in Los Angeles, California and the Michigan Branch, now in Royal Oak, Michigan.