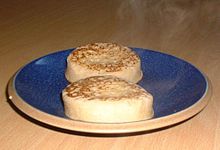 Being of English ancestry, I love everything English. Recently, I created a recipe for Crumpets. Ever since then, I cannot stop eating them. Most people probably have heard of them but have never tasted one. They are little, round, bread muffins, similar to English Muffins. They are light, airy, spongy and full of holes. Whether eating them hot off the griddle or toasted, they are amazing.

Thought to be an Anglo Saxon invention, there is mention of them in a Bible translation from 1382. The original ones were hard pancakes cooked on a griddle. The soft, spongy ones we eat originated in the Victorian Era, when they added yeast. In the English Midlands and London they developed the characteristic holes by added extra baking powder.
They are generally 8 inches round — I made mine smaller. You will also need Crumpet rings, or some other round cooking ring to make them.

I used whole wheat pastry flour to make my Crumpets. This is probably the closest type of flour in taste similar to what they used a long time ago. White refined flour was not invented when Crumpets were first created. Whole wheat pastry flour has vitamins, minerals, protein and fiber, whereas white flour has no nutritional value. It is empty calories. And once in your intestinal tract, it acts like glue, so you cannot properly digest the food you consume. I also made a version with whole spelt four. They turned out good, just a little heavier.

And there is a Scottish Crumpet that is more like a pancake. They are cooked without the rings, and are thinner. This variety is only cooked on one side, and is usually served with fruit. Traditional Crumpets are served with butter, or some butter substitute, and sometimes with jam.

Heat the 1/2 cup water to 110 degrees. Mix in the 1 tsp. yeast and let sit for 5 minutes. In a bowl, mix together the flour, baking powder and sea salt. Add the rice milk and yeast mixture. Whisk together until all lumps are gone. Cover the bowl and place in a warm place for 1 to 1 1/2 hours. This allows the batter to rise and create the air bubbles. Heat your griddle and crumpet rings. Pour a small amount of batter — not too much because they puff up when cooking — into each ring. Cook until the top is almost dry. Flip over and brown on the other side. Enjoy them hot off the griddle with a little olive oil, margarine or jam. You can undercook some to be toasted later. They store great in the fridge or you can freeze some to have on hand all the time.
~ Valerie Wilson