Body Mind Spirit GuideFor a healthy body, an enlightened mind, and a renewed Spirit
More
Home holistic alternatives How I Beat the Fear of Public Speaking (and how you can,...
Facebook
Twitter
Pinterest
WhatsApp
Linkedin 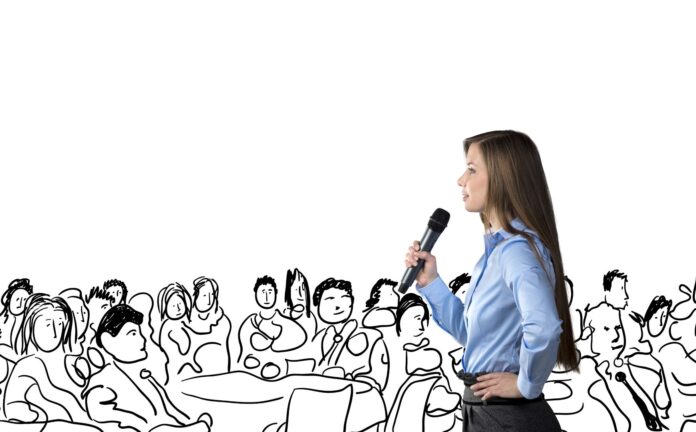 – Serving as the parent rep for my daughter’s preschool class (I would’ve loved it but bowed out when I found out
I had to speak at Parent’s Night)
– Applying for jobs at top companies (I dreamed about it but was too scared)
– Serving on the Parent Committee for my daughter’s elementary school.

I pretended it wasn’t that bad. After all, what was the big deal? I didn’t really need to be a parent rep anyway.
Plus, most people fear public speaking, so it wasn’t like it was just me. I mean, hadn’t I just read a statistic citing public speaking is the number one fear for 75% of adults? But still … it bugged me.

For as long as I could remember, I ran from the spotlight. I don’t know when it started – sometime around the age of 5 or 6 – but I hated being the center of attention. I blushed horribly. I stammered and stuttered. My heart would beat so wildly that it often felt like it would leap out of my chest. And my mouth? It felt like a cotton factory.

On my wedding day, I couldn’t even enjoy myself because I had to say my vows in front of 250 people. The same was true for my wedding and baby showers. It was a terrible way to live.

So at 34 years old, I made a bold choice. I decided enough was enough, and that it was time to face the fear. It was one of the scariest – and smartest, most empowering, and liberating things I ever did. I got up the courage to join Toastmasters, a public speaking organization. It is one of the best groups I’ve ever participated in and one of the best decisions I’ve ever made.

Earlier this year, I won my third Best Speaker award! I can now easily speak in front of 50 people or more. And I absolutely love it.

How did I beat the fear of public speaking? It started with the decision to stop allowing the fear to run my life. Affirmations, visualization, and taking action followed. I’ve used this formula over and over in my life with incredible success.

Are you avoiding something in your life out of fear? What is it? What can you do starting today to take your
power back?

~ Jaime Pfeffer loves helping passionate men and women who have incredible gifts to share, but get paralyzed by fear. Jaime helps these beautiful people to step out of their fear and into their true brilliance so that they can share their gifts with the world.

Jaime’s debut book, Uplift: Amazingly Powerful Secrets to Conquer Stress, Boost Happiness and Create an Exceptional Life, comes out in Summer, 2015. Catch her radio show Uplift! the 2nd and 4th Monday of each month at 1pm EST. on Body Mind Spirit Radio. Find her at jaimepfeffer.com