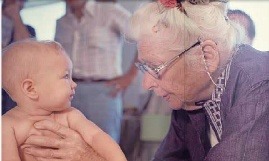 At the end of part two of this series, we left Dr. Ida Rolf at the Esalen Institute in Big Sur, CA, which at that time was at the very center of the ‘counter culture’ and a haven for transformational junkies. It was at Esalen that she finally had a growing group of students hand-picked by her, that were interested in the fullness of her vision and in dedicating their lives to becoming practitioners of Structural Integration bodywork. In the end, she ended up training about half of the Esalen staff.

As far back as the 1950s, Ida Rolf had been developing a coherent ‘recipe’ or sequence of sessions that could deliver the greatest degree of structural change, with the greatest chance that the client would be able to ‘hold on’ to the new. She continued to refine and tweak this series while she was at Esalen. It developed into a ten session process with a definite beginning middle and end. Each session would address a different layer and theme and lay the foundations for what would come next. The sessions are so dynamically interconnected (like pearls on a string) that she observed, “If you start with ten people and do a first hour, lo and behold, by the time they come in for their second hour everyone of those ten people will show you the same narrow symptoms. They will show you that their legs are not under them and will show you that their feet aren’t walking properly.” So, the second hour became the hour of working on the lower legs and feet. When clients show up for their third hour, their bodies are clearly asking for third hour goals and resolutions.

The ten session ‘recipe’ provided a structure for imparting to the client’s body her notion of CORE and SLEEVE, which involved lengthening and balancing the large surface muscles (e.g. hamstrings and quadriceps) around an ever more active core of deep intrinsics like the psoas. So the recipe starts on the surface of the body, dives deep into the middle of the series and ends with the last three sessions focused on integration. In an interview she said, “Any fool can take a body apart. The trouble is, they don’t know how to put it back together.”

In the early 1970s, Ida Rolf knew it was time to establish her own school, so she and a small cadre of new Rolf instructors packed-up their bags, and following the advice of several well known psychics, moved to Boulder, CO., setting-up the, Guild for Structural Integration. In addition to watching over the training of new practitioners, Dr. Rolf was very interested in research projects that could scientifically demonstrate and validate her work. One such project was
undertaken at the Movement Lab at UCLA, with eleven subjects. Using telemetric electro-recording, the subjects were measured, carrying out a series of everyday movements (walking, sitting, standing and lifting a stool). The subjects were
then take through the ten session recipe, and then retested.

These tests confirmed what Rolf practitioners and their clients had been noticing: when someone was ‘Rolfed’ or Structurally Integrated, their movements became dramatically easier. Muscles which were not necessary to carry out a movement but which in the past had gotten involved were now able to remain at rest……as though these myofascial units had received a memo with an updated ‘job description’. This effect was accomplished by releasing the adhesions or gluing
that often occurs between the fascia of neighboring muscles or whole muscle groups. Also noted in the study, was that the background electrical ‘noise’ or static at body areas far from the originating site of an action, quieted significantly.
No wonder so many athletes and dancers have found this work invaluable.

Just as she was interested in having her work validated scientifically, she was interested at least as much in the psychological and energetic effects of Structural Integration. She knew that when you changed an old survival posture
perhaps adopted in childhood (e.g. shoulders pulled up to the ears and head jutting forward of the torso) you opened many doors for change. She helped design another phase of testing by the Movement Lab, in which the subjects were observed by energy clairvoyants, including internationally well known clairvoyant, Rosalind Bruyere, in conjunction with bio-electronic sensors and kirlian photography, before, during and after being Rolfed. The study noted positive changes in the colors and energy emitted by the chakras, as well as a more coherent energy field around the subjects as they went through their Rolfing.

As the years went by, Dr. Rolf never tired of working with children. Maybe it was because of the amazing speed with which children respond to Structural Integration — their myofascial systems are still open and un-armored; what would take an hour to achieve with an adult, might take 5-15 minutes with a child. Or, maybe it was knowing how much less chronic pain the children would end up experiencing in the years ahead. It might also have had something to do with what one of her teachers once told me, “When you’re working on a child, you have that child’s entire family system in your hands.”

So in the end, what is the legacy that Ida Rolf has left us? I will let her answer, “We are after nothing less than the integration of the human body with the gravitational field of the earth.”