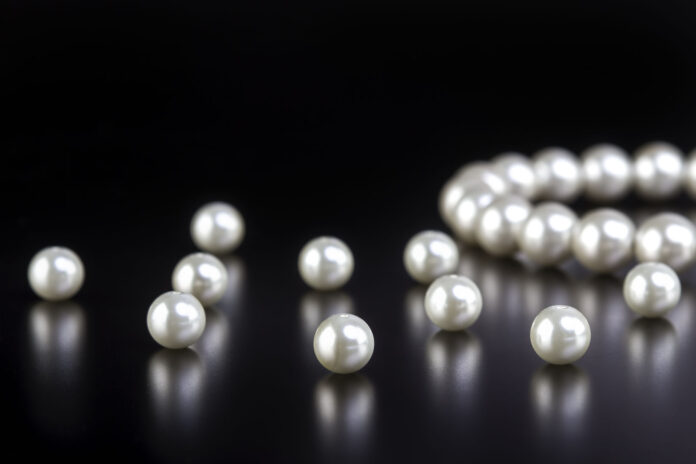 Pearls have a lovely natural luster and its translucence is what makes this gem a favorite among gems! Mostly recognized by its milky-white hue, pearls also occur in silver, white, green, black, blue and lavender. Their color depends on the type of clam or oyster that formed it, as well as various environmental factors that influence their formation.

Pearls are formed inside the shell of certain mollusks as a defense mechanism. When a tiny grain of sand or any foreign particle enters the tissue of the clam/oyster, to the mollusk inside, it poses a threat; and as such, to protect itself from the potential irritant (particle), it forms a pearl sac to seal it off. It then deposits layers of calcium carbonate in the form of mineral aragonite which is held together by a natural occurring compound called, conchiolin.

It’s these overlapping layers that reflect light and create the iridescent and translucent luster of this rare gem. Natural pearls are those that are nearly 100% calcium carbonate and conchiolin, and come in many shapes and sizes with the perfectly round ones not only rare but also highly prized. The process of building a solid natural pearl can take seven to eight years.

The word Pearl comes from the French, ‘Perle’ but is also derived from Medieval Latin perla, meaning “little bag”.

Ancient legends proclaim that the notion of pearls was believed to be the tears of the gods. Early Chinese myths foretold of pearls falling from the sky whenever dragons fought. The Ancient Greeks believed that wearers of pearls would promote marital bliss and prevent women who were newly married from crying. Nowadays, pearls are mostly harvested and cultivated for use in jewelry; however in earlier days cultures used pearls to adorn clothing.

Some of the best natural pearls are produced from the Gulf of Mexico, Persian Gulf, Sri Lanka and among many islands in the Pacific. Freshwater pearls are harvested in the rivers of Austria, France, Ireland, Scotland and in the state of Mississippi. Both freshwater and saltwater pearls occur in China and Japan.

Pearls are known to be very effective in aiding in health issues related to the stomach, heart and spleen. It is known to calm the mind, preventing hysteria and promoting mental stability. Pearls are thought to provide wisdom, enlightening the mind and inspiring mood. They are also thought to galvanize the laws of karma and cement relationships in love. Just as pearls are associated with love, they also imply purity, honesty, friendship, patience and peace. This gem is a great protective stone, also referred to as, “Mother of Pearl”; indicating a mother’s love and thus known to be a potent stone for the protection of children. A traditional gift for a 30th wedding anniversary, the pearl is also the most popular birthstone for the month of June.

Showroom of Elegance is a trusted, licensed and insured fine jewelry store located at 6018 Canton Center Rd. in Canton, Michigan.