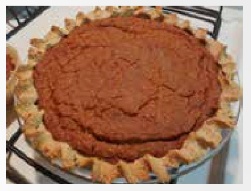 Ahhh, pie. A stable at every Thanksgiving dinner. As a kid, pumpkin pie was my favorite holiday pie. Since I changed my diet 20 years ago, every year I make my vegan, organic version. This year I have created a new pumpkin pie using apples to enhance the flavor, and I love this pie! The pureed apples add an additional sweetness, without adding a different texture. Today our holiday pies are very familiar to us, however, early pies would have looked a lot different.

Historians confirm that ancient people made pastries. Ancient civilizations used ground grains for the flour, and the primary fat was olive oil. The first pies were savory, containing meat and vegetables. The word, pie first appears in the Oxford English Dictionary in 1303. And by 1362, the word was documented as known and popular.

In Medieval England, the word pie, (the savory version) was derived from the word, magpie. The magpie is a bird known for collecting odds and ends in it’s nest. This reflected that people who ate pies were not picky about what they ate. These early pies had a varied and unique variety of meats and vegetables put into them. The phrases, ‘eat crow’, and ‘four and twenty blackbirds’, are not just funny sayings, they were reflections of what these pies actually had in them. This is also why people use those decorative, ceramic black birds that sit on the pie and help to cook the pies.

Early sweet fruit pies were referred to as tarts, not pies. They were made smaller in a single serving size so that they could be transported and eaten easily. They looked more like a turnover, than a piece of pie. And most people would not enjoy this version because it was all fruit, no sugar. Sugar back then was so rare and expensive, it was saved for the elite and the rich; a fact that makes those ancient tarts healthier for us. When the colonists came over to America they brought the recipe for tarts, but the translation got lost and started to be called, pies. Our pies have gone through many changes throughout the centuries, but one thing is for sure, our holiday dinners would not be the same without them.

Mix together the crust ingredients. Wrap in plastic wrap and refrigerate for 30 minutes. Roll out cold dough in between two pieces of plastic wrap. Put the crust in an oiled pie pan. To make filling, put apples in food processor and puree until apples are smooth. Add the rest of the filling ingredients and puree. Pour filling into a sauce pan and heat on stove for 10 minutes. Pour into the pie crust. Bake at 350 degrees for 45 minutes. Let cool completely before cutting and serving.