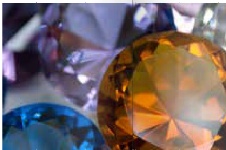 Characteristics:
Known for its beautiful hues of blue, Turquoise is an opaque mineral that has been treasured since the beginning of time. The mineral turquoise is a hydrated phosphate of aluminum and copper. The purest color of the turquoise gemstone is known to be the smooth blue of a robin’s egg, although it can range to shades of green to greenish and even yellowish gray.

Origin:
The substance has been known by many names, but the word turquoise, which dates to the 17th century, is derived from the French turques for “Turks”, because the mineral was first brought to Europe from Turkey, from mines in the historical Khorasan Province of Persia. Pliny the Elder referred to the mineral as callais and the Aztecs knew it as chalchihuitl.

Throughout history, Turquoise has been mined in: Africa, Asia, South America and North America. Most of the production in the USA takes place in Arizona, Nevada and New Mexico, all of which have held the honors of being leading turquoise producing states.

Folklore:
Turquoise is believed to be a protective stone and is worn to defend danger or protect from illness. It is a stone known to bring happiness and good fortune and is used as a premier healing stone, as it is noted for attracting healing spirits. Because it is an extremely protective gemstone, it is often associated with those who travel, keeping them safe on their adventures.

Characteristics:
The gem Zircon is a silicate mineral formally called zirconium silicate. Recognized as a colorless gemstone, its brilliance of a diamond lends to its use in jewelry to imitate diamonds. Zircon also comes in a variety of colors such as blue, yellow, red, brown and green.

Origin:
The name Zircon originates from the Persian Zargun, which translates literally to “gold colored.” The English word “zircon” is derived from “Zirkon” which is the German adaptation. Most of the world’s supply of the gem Zircon is mined in Russia, Pakistan, Afghanistan, Burma and Sri Lanka.

Folklore:
Traditional folklore says that the Zircon gem brings with it balance and a sense of spiritual grounding. Known to strengthen the heart, it is also associated with helping pregnant women give birth easily and quickly. It’s a stone that is believed to build confidence and fierce focus to its wearers. It is also a great gem to use in meditation.

Characteristics:
Tanzanite is an extraordinary gemstone that is classified as the blue/violet variety of the mineral zoisite. Its lush velvet blue and rich royal purple are what makes this gem so exotic and prized. Its phenomenal deep blue runs from marine blue to light violet blue, blue violet being its most coveted.

Origin:
The meaning of the name Tanzanite directly relates to the location in which it was discovered, Tanzania, Africa, specifically Mt. Kilimanjaro. Discovered in 1967 by a tribesman who stumbled upon a cluster of it, noting its intense blue crystals gleaming from the earth, who alerted a fortune hunter, Manueal d’Souza who quickly staked his mining claims. It was from there that Tiffany & Company recognized its potential, and as an international seller, made an exclusive deal to be the only distributor in the marketplace. It is Tiffany & Company who named the stone Tanzanite. After a huge marketing campaign, it was almost overnight that Tanzanite became popular with leading jewelry designers and gem experts around the world.

Folklore:
Tanzanite gemstones are stones of transformation; they are popularly noted as the powerful violet flame crystals. The crystals within tanzanite are known to have the highest spiritual vibration and are often referred to as “the stone of magic.” It brings with it a spiritual awareness and psychic insight, and is also called the “workaholic’s stone.” It’s a gem that helps you slow down and take life easy, bringing with it success and harmony, enhancing composure and poise.