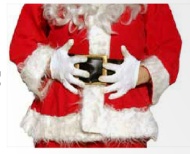 All the festivities of the season – the sights, sounds, and foods – help make the holidays memorable. Cooking, baking, and eating special foods are a large part of holiday celebrations but overindulging or eating unusual foods can lead to gastrointestinal nightmares. Keep reading if you don’t want to remember your holidays for all the wrong reasons!

The gastrointestinal system affects overall health more than you might imagine. Most people would be shocked if I were to mention that erectile dysfunction (ED) and male breast enlargement are associated with low stomach acid. Other common conditions that may be caused by low stomach acid include asthma, allergies, heartburn, and acid reflux.

Acid reflux typically starts with an overgrowth of microorganisms fed by undigested food that begins to ferment when it sits in the stomach too long. This bacterial overgrowth leads to excessive pressure which opens up the ring of muscle called the lower esophageal sphincter (LES) between the esophagus and the stomach. The esophagus isn’t designed to handle stomach acid at all, so any amount of acid that’s released results in symptoms of heartburn and acid reflux.

Certain foods, drinks, and medications such as NSAIDs, antibiotics, bronchodilators, beta-blockers, calcium channel blockers, antidepressants, anti-anxiety drugs, and anticholinergics have been associated with a weakened LES. This means these substances will compound any digestive problems you may already have. Pharmaceutical companies spend lots of money trying to convince us that stomach acid should be reduced or blocked when we’re experiencing symptoms of indigestion.

While OTC or prescription medications may help you obtain some relief from symptoms, it’s important to understand that this short term relief usually leads to more problems in the long run. For example, when stomach acid is blocked, gastrin levels soar – a scenario linked to stomach cancer. Treating symptoms instead of solving problems is almost always a mistake!

By understanding the amazing cascade of events that take place in the body for digestion to occur, you’ll see why stomach acid (pH) has such a profound effect. When food enters the stomach, the stomach lining stretches and signals nerve cells to begin secreting gastrin. There are several important functions of gastrin. It stimulates parietal cells to increase acid secretion. It stimulates ECL cells to secrete histamine, which stimulates parietal cells to release a substance known as intrinsic factor, required for the absorption of vitamin B12. B12 is necessary for normal nerve activity and brain function so it’s not just vegetarians who should take heed!

Gastrin also triggers the release of pepsinogens from chief cells in the gastric mucosa. Pepsinogens are converted into pepsin, an enzyme that breaks down protein. This occurs optimally when pH is 4 or less. If the pH rises to 5 or higher (less acidic) no pepsin is formed. This means that proteins won’t be converted into amino acids, the building blocks of the body.

Without protein digestion, the body cannot rebuild itself. If the food you eat doesn’t digest, you can starve even if you have a great diet. Since many people do not obtain adequate levels of vitamins such as folic acid (vital for keeping the cardiovascular system healthy), low stomach acid makes matters even worse!

Throughout this process, gastrin also signals the stomach to churn and grind its contents, called chyme. Once the proteins, vitamins and minerals are properly acidified, they can move ahead in a timely manner. When the chyme reaches the lower valve of the stomach, the pH begins to rise so that digestion and absorption can take place in the small intestine.

Acidified chyme stimulates the release of the hormone secretin which signals the pancreas to release digestive enzymes and ions of bicarbonate, which protect the stomach lining along with mucus. Another hormone called cholecystokinin (CCK) is released in the small intestine at the same time as the secretin. This CCK travels to the gallbladder to stimulate the release of bile into the small intestine for the proper digestion of fats.

An intact protective stomach lining is essential to health. Inflammation and/or ulcers may occur when the stomach lining is irritated by the bacteria, Helicobacter pylori, or drugs, such as aspirin and NSAIDs. Other allergic or inflammatory reactions causing damage to the intestinal lining may result in intestinal hyperpermeability, or “leaky gut” syndrome. One of the chief functions of the GI tract is to keep undigested foreign proteins where they belong, in the bowel. Damage to the intestinal lining allows bacteria, viruses, and fungi to enter the body.

The body is one of the most fascinating, marvelously engineered things I’ve ever encountered. When I add in the magic of chiropractic for helping the body run smoothly and repairing seemingly impossible problems, it’s no wonder I love helping people this way.