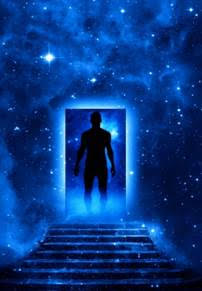 These days you can’t go far without hearing about those who can talk to dead people. Mediums have become a mainstream profession (well, almost); some even have highly rated TV and radio shows! Mediumship (talking with spirits) is much more mainstream today and people are now integrating into their conversations the acceptance about the very idea of talking with the dead. Even if there are fears or anxiety about the subject of spirits, people will now give an acknowledging nod of awareness, verses shutting down to the very idea that we can have a conversation with the dead.

But with all of this awareness, do we know anything more about what happens on the other side, and what our loved ones do over there?

Most messages from the other side are simple and brief, but very few messages come through about how their day is going or even where they are! I like to believe in the afterlife presented in a 1991 movie called, “Defending Your Life” starring Meryl Streep, Albert Brooks and Rip Torn. At the time this movie came out, I had already experienced my own death in the hospital and quite literally was brought back after being dead for more than 15 minutes. No, I did not suffer brain damage, but that can be argued, LOL! This movie version of the other side is really not that far off, especially for spiritual thinkers of today who realize that we are only here on earth in a physical life to learn and evolve our souls to a higher awareness. Upon graduating, we move to a higher conscious in the universe and we then no longer need to reincarnate to earth, but are now moving into a higher realm of existence living closer to the God consciousness.

When in the physical, the very idea of going to the other side, leaving the physical world and letting go of all that we seem to hold so dear, can be frightening. Even when one believes in God and an afterlife, doubt can creep in about how they will exist after death. People want to hang onto things, like a cat hanging onto your favorite curtains and can’t seem to let go! Many can’t imagine losing their material wealth, or letting go of their accomplishments accumulated in the physical world, or leaving loved ones worrying about their well-being.

That is why so many people want to immortalize themselves in so many ways; we build statues, carve images in mountains, bury ourselves with keepsakes, build pyramids — there have been some people that have made arrangements to have their wealth put into their grave with them. Some have even gone so far as to arrange that they be buried with their favorite car or motorcycle! Who says you can’t take it with you! However, once you have evolved past needing the physical attachment of the earth plane of existence, you find that this is all so unnecessary for your comfort and happiness; you will no longer have an ego!

For some, even moving to the other side does not release you from the need for surrounding yourself with things that are familiar. In my readings, I have seen spirits in their own living rooms watching TV; some look much younger than the age they were when they passed on. I have seen spirits having a get-together with family and friends that had passed away and now they are having a reunion party on the other side.

Sometimes they are trying to get information to their loved ones that are still living to help solve the mystery of their death or just to comfort their loved ones. Pets are waiting to reunite with us as well; they are eagerly waiting for their loved ones to come home as they did in life. Remember, when someone comes for a reading I do not know that they have a loved one or pet that may have passed; their spirits come to me to relay their messages. So next time you hear their voices, or sense a spirit even of a pet, take the time to tell them you love them and that you will always hold them dear. In future articles I will share what the differences are between a ghost and spirits.