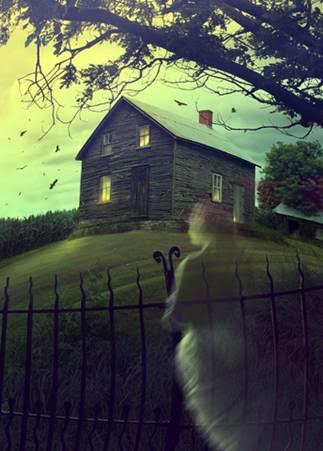 From the beginning of recorded history, people have talked about seeing ghosts. These are spirits that wander on the earth. You may find them in graveyards, houses, jails, airports, churches, and historical sites. This is only to mention a few places where they have been seen or heard. Sometimes they show up in photographs as orbs, but also as a ghost’s figure.

I spoke at the Corinthian Church in Jackson, Michigan, where many Earth Spirits showed up during a prophesizing service. Rev. Connie Price was taking pictures with her iPhone during my readings.I spoke with many spirits that day who shared messages from the other side.It was an electrifying day, but the most exciting part of it was regarding the spirits that were caught on Rev. Price’s phone; not only orbs, but actual faces and complete images of people who were in spirit.

So the bigger question is, “Why do some people move into the light after death and others stay earth bound?” There is also a phenomenon called, ‘phantom ghosts’ which are not really spirits left behind on earth, but instead only leave a residual energy, repeating a moment in time over and over again.Let’s explore each of these types of ghosts/spirits.

A question often asked is, “Is there a difference between spirits and ghosts?” Yes, and No. Once you are in energy form (out of the physical body) you are a spirit, however, sometimes one keeps the body they knew in life, as they are still connected to their body image.Some souls release the body they knew in life and are now an orb or energy being. This is the true form of the soul.

When souls remain earthbound they may need to send a message through to the living for many reasons, and once that is complete they can move into the light. Still, others are not sure they are dead and are in a bit of a shock or are even confused by their lack of interaction from people they are trying to communicate with. Usually, once they are aware of their death, they move into the light. Extreme grief can keep a soul from moving into the light as well. It is necessary to move through the steps of grief and send your loved one into the light.

Sometimes when there has been a mass death such as an airplane or train crash, a ship sinking, or a battle, you will find that the trauma may keep all or most of the souls in a time loop reliving the same moment. While I was in Gettysburg I saw through mediumship, the battles continuing as if it were still their moment in time. My belief from witnessing these events and others like them is that the souls are caught in a time displacement and can be released one at a time or as a group.

However, souls caught in a time loop are the most difficult to release into the light, but it can be done. Whenever we remember a mass death event it is always important to bless their souls and ask them to move into the light. Prayers are very powerful, so make sure when you have a ceremony or funeral of remembrance that you include an encouragement for the soul to move toward the loving energy of the light.

Once a soul has moved into the light, you can still have contact with them as long as they are still willing to communicate. Once they move into the inner sanctum of the light and are now looking at the life they experienced, they will take the next step to prepare for a new life either on earth or on another dimensional plane. You may not communicate with them any longer; much like someone moving to a place on earth which is too remote to reach by phone or internet.

When I perform funerals, memorials or celebration of life ceremonies, I communicate with the soul beforehand. Many times the soul will have messages that they want to have me communicate to their loved ones. In my ceremonies I always have an ascension prayer to move the soul into the light with love.

“The Wendy Powers Radio Show” Sat. April 2nd 10:00a.m. EST. Connect through the web at www.BodyMindSpiritRadio.com or you can get into the queue for a mini-reading by calling 646-378-0378. I discuss spiritual topics and do mini-readings throughout the show: Over 80,000 people listen in every month from all over the world! The phone lines fill up fast so call in early; you may get lucky and be picked to have an astounding mini-reading by Wendy!

My Spiritual Topic: Spirits and Ghosts