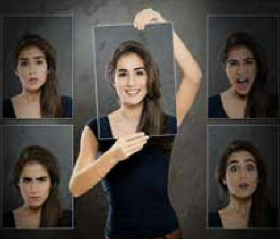 There are four primary afflictions. An affliction is essentially a negative mood state, and each of these afflictive moods naturally produces certain cognitive narratives or thought patterns.

1) Sadness: Sadness is an afflictive emotion. The extreme version of sadness is clinical depression. When one is sad, that sadness creates a narrative of loss, bitterness about the past, self pity, and brooding over life events. Like all afflictive emotions sadness feeds itself, becomes preoccupying and blocks out all positive events that may be open to the person.

2) Anger: We often experience anger when we do not get what we want. Anger is usually triggered by frustration. Frustration is a product of desiring something, someone, or attachment to a particular outcome. When our desires are frustrated it naturally triggers anger. The narrative of anger is destruction. Anger leads to acts of violence. Violence manifests itself in verbal or physical aggression to others, or in self-destructive anger from harsh self-criticism to physical destruction in the form of suicide.

3) Fear: A pounding heart, shallow breathing, and nervousness characterize the physiology of fear. Anxiety is a variety of fear. We speak of a person as being anxious when the mind knows that the fear we feel is obviously irrational, but the fear feelings persist. With anxiety, the physiological response is the same as fear but the narrative is different. The anxiety narrative is, “the sky is falling”. When in the grips of anxiety, even minor events are experienced as potential disasters. People obsess over the possibility of what will go wrong, and the unfathomable catastrophe that will accrue.

The clinical antidote to anxiety is often an anti-anxiety drug like Xanex. Note that Xanex simply lowers the fear physiology; it does not change the potential looming disaster, but when one is calm, risky events are not experienced as potential disasters. The Buddhist emphasis on calming the mind is a natural, non-medical approach to calming anxiety. Calming the mind changes the narrative; fear is transformed into equanimity. A narrative of disaster is thus changed into acceptance and personal resilience.

4) Grasping: Grasping is the constant desire for what one does not have. Obsession is the extreme form of grasping. When a person is obsessed with another person, thing or event, they are driven not by love or healthy desire but by discomfort. Obsessions are inherently uncomfortable. Grasping leads to constant unhappiness. The person in the throes of grasping is never at peace. Whatever one has, they want more. They cannot be present, and it is in the present that real happiness occurs.

These four afflictive emotions are the core of our suffering. At times they are combined to produce second tier afflictions. For example, “jealousy” is a combination of grasping (wanting what the other has) and anger (wanting to destroy the other person with whom we are jealous). The feeling of “withdrawal” from the world is a combination of both sadness and fear.

Mindfulness practice is aimed at taming afflictive emotions. It does so by various techniques that enable one to observe such feelings, rather than identify with them. Mindfulness is a mental tranquilizer; it makes the mind tranquil, and a calm, reflective mind does not produce afflictive narratives. Pure observation alters both mood and narrative.