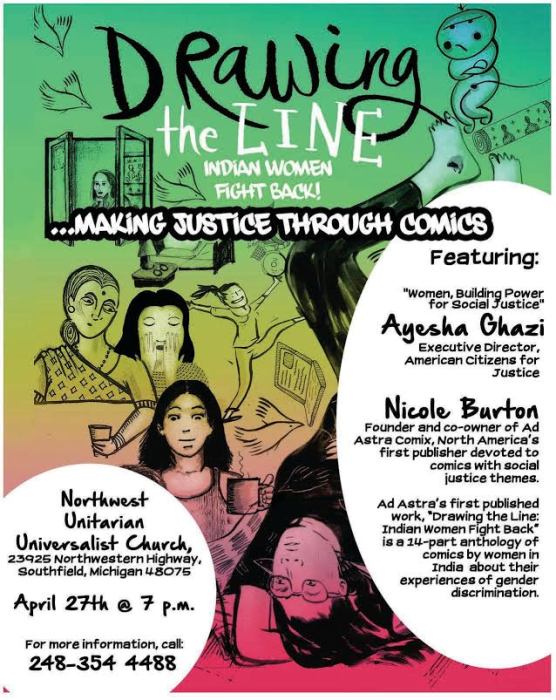 Women Making Justice through Comics is a human rights event that will be held April 27 at Northwest Unitarian Universalist (NWUU) Church in Southfield. This is in collaboration with Ad Astra Comix, Green Brain Comics, American Citizens for Justice, NWUU, and Book Beat Bookstore.

It began in 2015 with collaboration between Green Brain Comics and ACCESS of Dearborn. Chelsea Liddy, an employee of ACCESS, had a dream to address social justice through an alternative event called Comique Con, held in November at the Arab American National Museum. Nicole Burton of Ad Astra Comix was a vendor for this extremely successful event. The two women have been collaborating since then. Both understand the need to reach a broader audience when addressing global social justice, especially regarding women’s issues such as sexual harassment, domestic violence and trafficking. Using comics is an effective way to address human rights issues. “Comics are great for college students, because they’re quick pleasure reads in between studying,” stated Liddy. But comics are not only for young people. Avid readers come from all generations. And this tough topic is well addressed through this medium.

Ayesha Ghazi was an International Human Rights fellow working with Amnesty International USA during her undergraduate career. She then worked as a graduate fellow for the office of State Representative Rashida Tlaib as well as at ACCESS’ National Outreach Department as a National Outreach Policy fellow. She is now the Executive Director of American Citizens for Justice. The organization serves the Asian Pacific American communities of Michigan, standing for the civil rights of all Americans.
Northwest UU Church is a multigenerational, diverse congregation grounded in the history and heritage of liberal religion, united in a belief in the worth and dignity of all people, and the obligation to express faith through acts of justice and compassion.