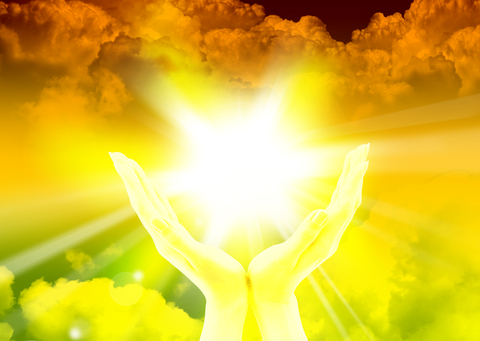 We are asked to have blind faith in so many things including God. A friend of mine, Dan, who is still struggling with the concept of belief in things not proven to him either by science or by his first hand verification, posed an interesting question to me. Now it must be noted that this person is a devout Christian. His question was, “You don’t believe in ghosts or even aliens, do you?”

He went on further, saying that there has been no proof that can verify that such things exist, plus the Bible of course does not teach that these things are real. Dan thought he had me on this because, as I said, he is a devout Christian who wants to believe in nothing but what he has been conditioned to think and believe through his religion.

So here was my response: “Do you believe in God?” His answer was, “Of course I do!”

I asked, “Have you ever seen him? Heard him? Touched him? Is there absolute proof that there is such a being?” He answered, “I guess not.”

“But, you still believe that He exists, don’t you?” I replied. Then Dan reluctantly answered, “Yes..,” knowing that he’d just had a head-on collision into ‘faith’.

I find it interesting that people will accept on blind faith the concept of God and angles but not allow themselves to realize that we are also connected to energy and beings outside of our understanding. When I do readings or touch into the universal mind, I must do this without seeing the face of any being or proven energy source offering up answers. I must do this in faith.

When Jesus was on Earth sharing knowledge of His (our) Father, He would perform miracles asking those that witnessed them to have faith that they also have the power to heal and change the circumstances in their life, health challenges or even their financial distress. Anyone who has studied the Bible will recall the challenge that Peter had with his faith.

25 Shortly before dawn Jesus went out to them, walking on the lake. 26 When the disciples saw Him walking on the lake, they were terrified. “It’s a ghost,” they said, and cried out in fear. 27 But Jesus immediately said to them, “Take courage! It is I. Don’t be afraid.” 28 “Lord, if it’s you,” Peter replied, “tell me to come to you on the water.” 29 “Come,” He said. Then Peter got down out of the boat, walked on the water and came toward Jesus. 30 But when he saw the wind, he was afraid and, beginning to sink, cried out, “Lord, save me!” 31 Immediately Jesus reached out His hand and caught him. “You of little faith,” He said, “why did you doubt?” 32 And when they climbed into the boat, the wind died down. 33 Then those who were in the boat worshipped Him, saying, “Truly you are the Son of God.”

As you can see, it is so easy to let fear steal your faith. My bringing up this subject of faith is not to test your Biblical beliefs, but instead to open your soul to the fact that you have been shown in so many ways that we are not alone and that there are indeed ghosts, angels, aliens, auras and a universal mind that we are all connected to. If you allow yourself to stay in faith instead of fear, you can bring amazing things into your life such as, you can heal yourself, bring about wealth, love, and have power in your life to change what you need to change.

Our soul energy is connected to the universal mind of God. We have so much within our control, and if we were to listen and allow the knowledge to flow through, we would find that we have most of the answers. People come to a psychic counselor such as myself because stress and fear keep them from seeing the truth and answers for themselves. Much like Peter, we find ourselves sinking into the sea of doubt. Have faith in your connection to the universal mind of God and you will find answers.