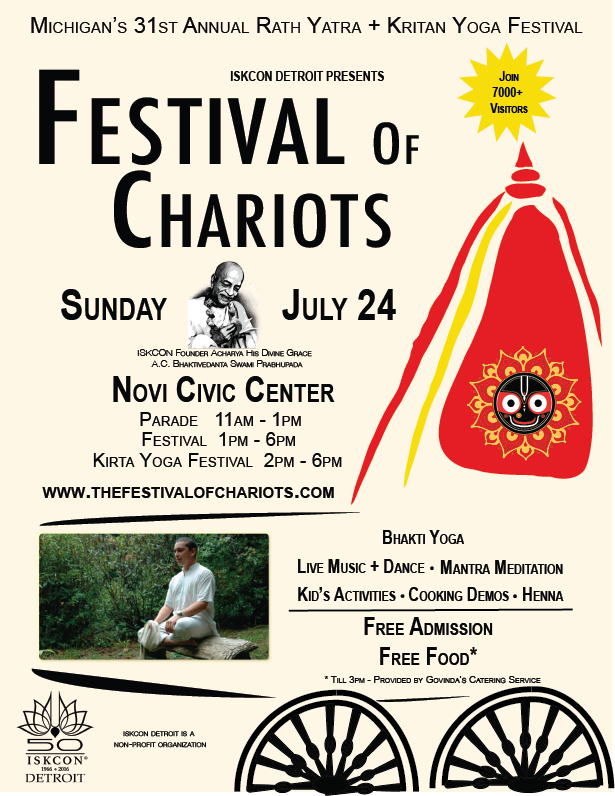 31st ANNUAL FESTIVAL OF THE CHARIOTS

July 24, 2016 – The 31st annual Festival of Chariots parade will take place on July 24th(Saturday). City of Novi Mayor and other dignitaries will be in attendance to help celebrate the grand event showcasing India’s spirituality and culture. Over 10,000 visitors are expected to join in this FREE celebration, which is open to the public.

Guests of all ages will enjoy various forms of entertainment, a FREE lunch, live dances and music, kirtan yoga, unique shopping, cooking demos, henna, Vedic culture and arts, and many kids activities. Guests will see colorful floats, traditional costumes, ancient Hindu rituals, unique music, and dramas. The whole family will enjoy exploring this unique cultural exhibition revealing the spiritual heart of India. The Kirtan Yoga Fest will debut at the Festival of Chariots and feature artists from New York, India and around the world, including Grammy-nominated Gaura Mani.

The interactive three-mile parade begins at 11:00 am from the Novi Civic Center with an opening ceremony including appearances from the mayor and other dignitaries. With replications of this festival all over the world, over one million people participate in this thousands year- old Indian celebration. Do not miss out on the FREE opportunity to learn about the fascinating culture of India.

The Festival of Chariots was first performed outside of India on July 9, 1967 in San Francisco, under the supervision of His Divine Grace A.C. Bhaktivedanta Swami Prabhupada. Srila Prabhupada is the Founder-Acarya of the International Society of Krishna Consciousness (ISKCON). Iskcon is celebrating its 50th anniversary of its inception. Today, the Festival of the Chariots is performed around the world, including down 5th Avenue in Manhattan, along Pacific Coast Highway in Laguna Beach and through Trafalgar Square in London, UK. Detroit held its first Festival of Chariots in 1985 and has become one of the largest celebrations outside of India. For more information visit: www.thefestivalofchariots.com.