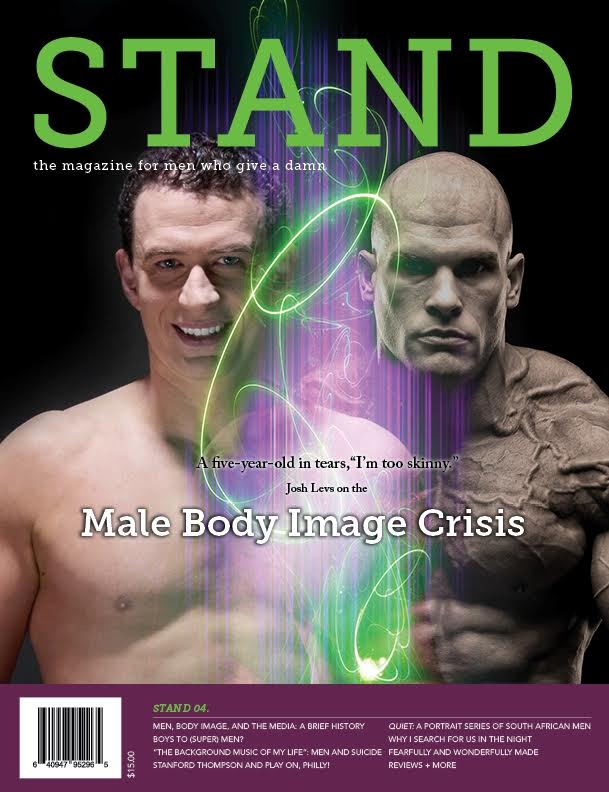 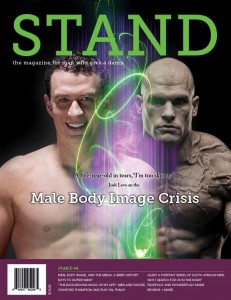 STAND magazine, for men who give a damn about being better men, announces the publication of issue 04, focused on male body image.

With gentle coaxing, he finally let it out — through tears, slowly, and pausing after each word: ‘I’m too skinny.’”

Also in this issue, David Stanley writes of the rising rates of suicide among men.

Josh Levs answered some questions about his piece on male body image.

1. Why is the issue of male body image important to you?
It summarizes the ridiculous, unhealthy portrayals of masculinity that are so damaging. It’s a literal manifestation of the pressure on boys and men to conform to impossible expectations. It’s one of the issues I tackle in my book, All In. And this problem is deadly. As readers will see in the story, boys and men are struggling, and some become suicidal. But this problem is taking place in the shadows. This article is aimed at helping bring it into the light.

2. What are some factors behind the male body image crisis?
Media images, especially magazine covers, that take men on lots of steroids and Photoshop them to make them look even more warped. Entertainment shows and TV interviewers who extol actors’ unhealthy physical transformations as though becoming massive makes men look better. The easy availability of all kinds of chemicals — as one expert in the piece puts it, “It’s the wild, wild west.” And a lack of awareness on the part of medical professionals and parents about the fact that this problem exists.

3. What can parents do to help their sons develop a positive image of their body?
Get real about the body. Help them understand that the goal is always to be healthy — not the Hulk.
Help them see that they look great as they are. Keep an eye on them through adolescence and teenage years. Notice if they’re getting extremely pumped — and, if so, make sure they know the dangers of using steroids and growth hormones. Always keep in mind that Body Dysmorphic Disorder manifests differently in boys and is just as dangerous as it is in girls.

Josh Levs is a dad of three and the author of the widely acclaimed book All In: How Our Work-First Culture Fails Dads, Families, and Businesses–And How We Can Fix It Together. A former reporter for NPR and CNN, he now focuses on issues of gender equality and fatherhood full time. The U.N. has named him a global gender champion, the New York Times called him a “pioneer,” and the Financial Times named him one of the top 10 male feminists. Learn more atjoshlevs.com.

Levs is available for comment on this story at josh@joshlevs.com.

Oakland County Residents FREE for – My Place – Center for Wellness