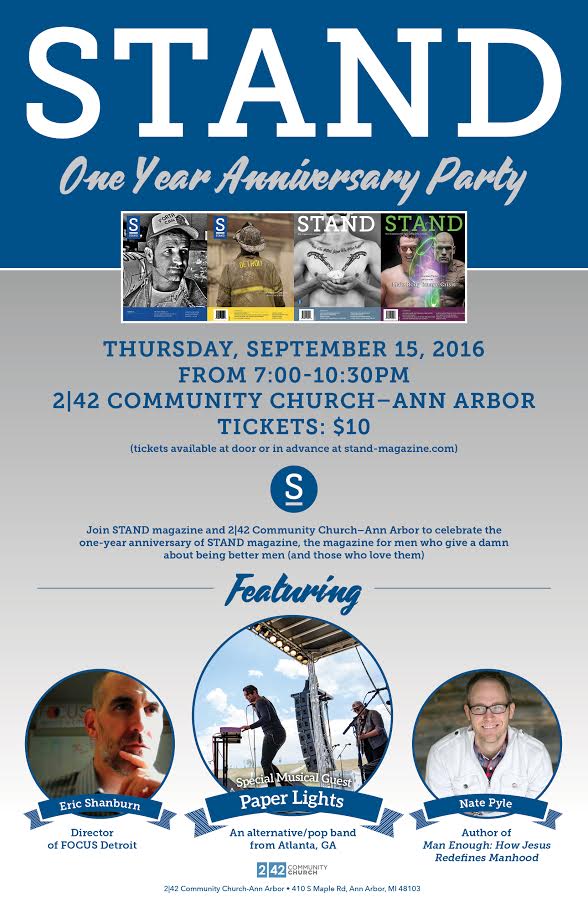 September 6, 2016 – STAND magazine, for men who give a damn about being better men, will host a one-year anniversary party on Thursday, September 15th.

In addition, pastor and author Nate Pyle, from Indiana, will discuss his book Man Enough: How Jesus Redefines Manhood (http://natepyle.com/man-enough/).

The evening culminates with a performance by Atlanta-based alt-pop band Paper Lights (http://www.paperlightsmusic.com/).

Over the last two years Paper Lights have toured nationally, opening for acts such as Allen Stone, The Fray and Miike Snow. Their music has also been featured in commercials for Coca-Cola, Land Rover, Boeing, MTV, ESPN, Chick-fil-a and Outdoor Magazine.

Attendees will also have an opportunity to meet the STAND editors and pick up copies of the first four issues of the magazine.

Tickets to the STAND magazine anniversary party are $10 and can be purchased in advance at www.stand-magazine.com or at the door on the night of the event.