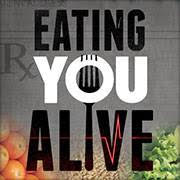 Why are Americans so sick? Who’s responsible for feeding us information about what we eat, is it accurate, and is it possible that by making one key lifestyle change we can heal ourselves…and our world?

Tackling these questions and more is “Eating You Alive,” a new documentary debuting Tuesday, Oct. 4 at Birmingham Seaholm High School. Hosted by Plant Based Nutrition Support Group (PBNSG), the event is one of just a few pre-release screenings taking place in select cities in advance of the film’s wide release to theaters across the country starting in November.

Featuring leading medical experts and researchers, “Eating You Alive” takes a compelling look at our nation’s health woes and reveals the truth behind why more Americans are disabled and dying from chronic conditions than ever before, and especially how one specific lifestyle change – choosing whole, plant-based foods over animal products — could be the solution. Well-known physicians Dr. Neal Barnard, Dr. Caldwell Esselstyn Jr., Dr. Joel Fuhrman, Dr. Michael Greger, Dr. John McDougall and Dr. Dean Ornish are interviewed, along with many others including Academy Award-winning filmmaker and deep sea explorer James Cameron, environmental advocate and actress Suzy Amis Cameron, magician Penn Jillette, and the “hardest working actor in Hollywood,” Samuel L. Jackson.

According to Chatlin, “The film shows how one profound lifestyle choice can radically combat chronic disease and soaring healthcare costs, and also have major global impact.”

A growing body of medical research and compelling real-life testimonies point to adopting a whole-foods, plant-based diet as a particularly powerful way to regain our health.

A whole-foods, plant-based diet consists of vegetables, fruits, whole grains, beans, legumes, nuts and seeds and generally avoids added oils, refined flours and sugar along with all animal-derived products. In addition to its documented health benefits, a plant-based, or vegan, diet is least harmful to the environment, and reduces the largely inhumane slaughtering of 22,000 animals per minute in the U.S. alone.

“PBNSG is hosting this screening because we want to inspire people to take control of their own health, and to provide them with tools and tips for doing that,” adds Chatlin.

“Eating You Alive” premieres Tuesday, Oct. 4, 6:30 pm at Seaholm High School, 2436 W. Lincoln in Birmingham. The $20 ticket price includes a meet-and-greet panel discussion with the film’s producers and other guests to be announced. Tickets must be purchased in advance at www.pbnsg.org/eatingyoualive/. No door sales will take place the night of the screening.

Related events include a restaurant dinner with the film’s producers on Oct. 3, and a pre-screening dinner at Seaholm catered by The Clean Plate at 4 p.m. on Oct. 4. For details and tickets, visit www.pbnsg.org/eatingyoualive/.

A Garden Fresh Media production, “Eating You Alive” is distributed in association with Film Festival Consortium by DigiNext, a joint venture between Carmike Cinemas, the nation’s fourth largest theatrical exhibitor, and Nehst Out LLC, a global feature film and documentary distributor.