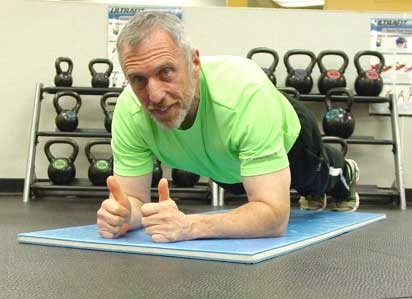 Paul Chatlin, Founder of Plant-Based Nutrition Support Group
A true friend and lifesaver to all and isn’t stopping in 2017

Paul Chatlin’s story really begins in May of 2013 when his chronic chest pain had reached its peak. He knew that he needed to find out the cause. “I knew I was not well. I had to take a break to catch my breath every 10 steps or so. I felt the pressure on my chest every morning,” expressed Chatlin. “After a period of time the pain would stop and I would move on with my day, but now I had to make many, many more stops to rest.”

Plant-Based Nutrition Support Group (PBNSG)founder, Chatlin, was 56 years old when told he had three blocked coronary arteries: one 100% and two 65% blocked. Minutes before being wheeled into the operating room, his cardiologist suggested Paul try a unique nutrition plan.

After months and months of angina, chest pain grew in intensity, and duration. Chatlin knew that something needed to be done, but fear can often become a detour to reality. Paul’s instincts, and a caring wife knew that he needed to get to the hospital. He was feeling “really bad, the kind of bad when you know something was not right.”

Chatlin got an appointment at the Cleveland Clinic in just 3 weeks, which he calls miracle number one and then was assigned to a cardiologist whose mentor just happened to be Dr. Caldwell Esselstyn miracle number two.

Then, just after my heart catheterization (when they finally found out what my problem was), my doctor called Dr. Esselstyn while I was in the recovery room (still on a gurney) and said: “Hi Essy, this is Mazen, I think I have a patient for you.” The phone was handed to Chatlin and while still laying in that recovery room a start of a deep love and respect and change of life began for Chatlin, now miracle number three.

His cardiologist gave him two options, by-pass surgery, or try a plant-based diet. That’s when he met Dr. Esselstyn and after that meeting, Paul decided to follow the pillars of Dr. Esselstyn’s book, Prevent, and Reverse Heart Disease.
Paul reported that after just three short weeks, his angina disappeared. Within one year, his cholesterol levels dropped from 309 to 122, and now at 57, he has lost 43 pounds and maintained the loss.

Then Paul decided to do something unique and give back by reaching out to help others and created the “Plant-Based Nutrition Support Group (PBNSG).” PBNSG has over 2000 members and promotes plant-based whole food nutrition and an active lifestyle, to help prevent or reverse chronic disease and achieve optimal health through meetings, seminars, and more. As founder, he has his own posse of followers and they are all getting healthier, one forkful of kale at a time.

PBNSG offers CME credits to both doctors and nurses. When you meet Chatlin you find him to be optimistic and to be involved in changing paradigms in the vision of how to see rather than how they are.

This is why he has taken to educating even the medical profession at Wayne State University, Michigan State University and University of Michigan:
· So far PBNSG has brought speakers to (at least) 500 1st and 2nd-year medical students at Wayne State, University of Michigan and Michigan State.
· Of those 500 future doctors, if only 5% of them decided this message is worth sharing with their patients that would make 25 plant-based doctors.
· If those doctors see about 20 patients a day for a total of 240 days a year (and each patient comes about twice a year) that would mean they are caring for a combined 2,400 patients.
· If all of our plant-based doctors carried on this way for 30 years that would mean they would have touched a combined 72,000 lives.

Plant Based Nutrition Support Group | www.pbnsg.org| 248-919-8726
PBNSG is a 501(c)(3) nonprofit organization dedicated to evidence-based education and advocacy of plant-based whole food nutrition and an active lifestyle, to help prevent or reverse chronic disease and achieve optimal health. Seek advice from your health care professional before making any changes to your current lifestyle.