Body Mind Spirit GuideFor a healthy body, an enlightened mind, and a renewed Spirit
More
Home SPIRITUALITY consciousness A Horse and a Bridle with My Name on Them
Facebook
Twitter
Pinterest
WhatsApp
Linkedin 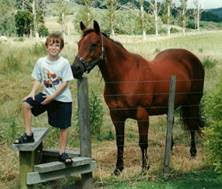 I just got done reading a book I loved called, “Epic” by John Eldredge. Here is an excerpt from it describing memories of summers when the main character, as a youth, stayed with his grandpa on a huge farm. Every Sunday would be ‘visiting’ day. He and his grandpa would not work on the farm, and would instead go visit friends.

“Whatever folks were doing, they’d drop everything to sit and chat, telling stories, laughing about this and that, asking me what mischief I‘d been into,” he said. “Now, here was the best part of it all; I didn’t have to invent that story. It didn’t depend on me. It had already been going on, years before I ever existed, a great adventure and a fellowship. A story in which I could be a part. And they wanted me to be a part of it. They looked forward to my coming. There was a horse and bridle with my name on them.”

This boy felt a part of something bigger than himself. He had a sense that his being a part of these summers, of these Sunday visits, and of the amazing adventures with his grandpa was significant. He knew he would always be a part of the story now–maybe even for generations to come.

The boy ‘got it’ that his summer farm experiences and relationships with those people put him into a story that would be told for years to come. But he wasn’t just a part of new stories that could be told to future generations. He had a place in a story that had been going on for years before he was born. We all are part of a LARGER story that started before we were born. Our story is filled with relationships, adventure, love, risks, evil, and the hope for a happy ending. We each have or had a crucial role to play in the story.

This book talks about how at times our lives feel like a movie that we’ve arrived to forty minutes late. We sometimes find ourselves asking, “What happened?” or “What did I miss?” To find out, you have to watch one scene and then the next to let the story unfold. And eventually, we see that something that happened earlier was the reason or the answer to “Why did that just happen?” Or, “Why did she react that way or why didn’t he go there?”

Each character is part of a larger story, not just a part of that one scene. Looking at one scene or one experience does not tell the whole story, nor explain who that character is or why they are in the movie. We have to watch the whole movie to make sense of it, and to experience joy, the lessons, maybe some fear, tears and often laughter.

Our lives do feel like movies. Nasty things happen, awesome things, and sometimes tragic things. There are heroes and villains that show up. We don’t know how to make sense of it all sometimes. To really figure out what our lives mean, we need to think about how we are each a part of a much bigger story. How we ‘show up’ in the story matters. The relationships, adventures, love affairs, our choices, and our interactions with others affect the story. The story started before we were born and will continue after we die. Each of us has a really important role to play in this story called life.