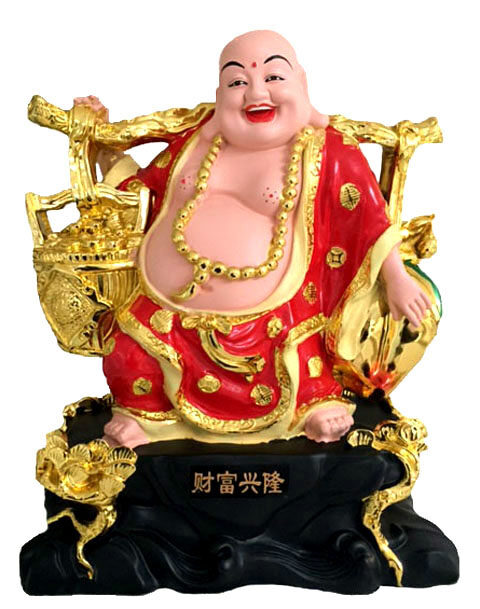 It was Saturday morning, the day after St. Patrick’s Day. I was sitting with my husband at the kitchen table; we were informally chatting, having fun. All of a sudden he sprang into high gear and said, “What’s that big thing out on the front porch?”

“That big thing” he repeated, “it’s on the porch.”

“I don’t know what you’re talking about,” I said. “Do you mean the chair? Or the big red flower pot?”

“No—not the chair or the flower pot,” he replied.

As I restated that I had no idea what ‘big thing’ he was referring to, I watched him exit through the living room heading straight for the front door; he opened it, then momentarily disappeared outside to the porch.

He re-entered the house, and to my amazement, was carrying a large statue of a laughing Buddha, brightly clad in vibrant red and gilded gold regalia. I couldn’t believe what I was seeing—it was like the best birthday ever only it wasn’t my birthday.

I came alive in my chair, “Who is it from?” I asked, eyes widening.

“I have no idea!” he replied with youthful, boyhood enthusiasm, as if he was just bestowed a new bike and it was the coolest bike on the block. “There’s no card or note anywhere.”

We cleared a spot and carefully placed the jolly fellow on the white cotton tablecloth; his joyful exuberance filled the room. His radiant, carefree demeanor was contagious, and for a while my husband and I disappeared from the familiar realm we’d awakened to just a few hours prior, and now found ourselves suspended in a thought-free state, lost in the blissful world of our new roommate.

It felt like we’d won the lottery. “He looks like a Buddha of abundance!” I proclaimed, admiring the gold coins overflowing from his large, glossy satchel. We examined him like a fine piece of china—front to back, bottom to top, side to side. I felt blessed.

We later discovered that our new friend was a monk who’d lived over one-thousand years ago. He was kind, generous, eccentric and saintly. His name was Pu-Tai, meaning ‘Cloth Sack’, referring to the bag he carried with him. In Chinese folklore, he represents prosperity, wisdom and contentment.

This charismatic monk traveled from town to town, spreading happiness and joy to all the people. He loved children, and was known for giving them sweets and small toys that he removed from his sack. When he finished, he’d set his bag down, look up at the sky, and begin laughing whole-heartedly. Within moments, everyone was laughing! With that, he moved on to the next village.

Pu-Tai even used his death as an opportunity to teach that the power of laughter helps make our problems smaller and easier to manage. In his final days, he asked a close friend to burn his body immediately after his passing, which was surprising as this was not a Buddhist custom. As soon as the fire was lit, fireworks began to rocket through the air! Pu-Tai had hidden firecrackers in his robe, creating laughter to uplift the heavy hearts of the sorrowful crowd who had lost their beloved teacher.

The thought that a friend, or perhaps one of my meditation students, was inspired to drive to our home in the dark of night and anonymously place Pu-Tai beside our front door is a heavenly experience to bask in—warm like the Caribbean sunshine.

Over the years, I’ve come to cherish the importance of laughter in my life, which has been both transforming and profound. And believe me, it has taken a lot of work to get there. Laughter keeps my perception clear. It helps keep me buoyant, light-hearted, and better able to ‘go with the flow’. And, it helps keep my mind happy and at peace.

It is perfect then, that Pu-Tai arrived at our home just in time to celebrate April, “National Humor Month.” It’s a reminder to make laughter a daily practice—to let go of the small stuff; to walk with a spring in our step; and just like Pu-Tai, to look up at the sky and laugh. After all, there’s always something to laugh about—the smudged mascara, the unruly hair sticking up, the sock that got lost in the dryer…

P.S. If it was you that gifted Pu-Tai to us, from the bottom of our hearts, we thank you!