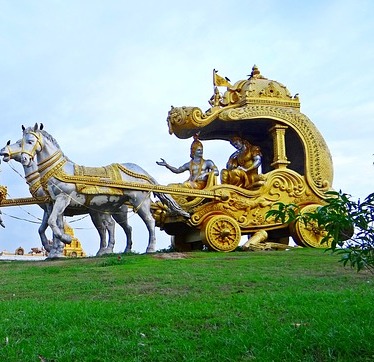 Arjuna is one of the hero’s of the Hindu classic the “Bhagavad Gita”. Abraham is the foundational patriarch of the three great Western Religions: Judaism, Christianity and Islam. Both men faced ethical and psychological dilemmas. Each conflict was conceptualized, and resolved through the prism of their disparate religious/cultural traditions.

The story of Abraham begins with God’s calling, “Go forth from your native land and from your father’s house to the land that I will show you.” Abraham follows God’s commandment to journey to a land that God has chosen for His people (Israel). This is also the first test, as God is assessing Abraham to see if he is fit to become the Patriarch of a nation; if he will be God’s incarnate messenger.

According to Jewish Midrash (A type of imaginative comment on portions of the Bible), Abraham went through nine such tests, and each time met God’s wishes. Each test also resulted in a type of mystical union where the ratzon, the will of God, became inseparable from the ratzon, or will of man, of Abraham. The merger of the human psyche with God’s will is the highest transpersonal state accessible to man.

The tenth test was Abraham’s greatest challenge. In exchange for his adherence, God promised Abraham material goods–land, animals, abundance– but most importantly the role as Patriarch of a nation, a people as plentiful as the sands of the desert. But a patriarchy begins with an heir who will enhance the pleasure and purpose of this earth, but also serves as the seed of that future nation.

o But Abraham’s wife was infertile.

o And Abraham toiled for years without reward.

o Abraham finally does have a child with the slave woman, Hagar.

He is named, Ishmael. Miraculously, Abraham’s wife Sarah soon does give birth to a son, Isaac. Jealous, Sarah helps to banish Hagar and Ishmael so that Isaac will remain the only heir. But Ishmael is considered Abraham’s spiritual heir, and gives birth to the lineage of Islam.

With an heir, Abraham sees his work rewarded, and the promise of a future realized.

In the middle of this blessed life God comes to Abraham: “Take your son, your favored one, Isaac, whom you love, and go to the land of Mariah, and offer him there as a burnt offering on one of the heights that I will point out to you.” God wants Abraham to murder his own son and offer him as sacrifice to God’s desire.

This scenario is called, The Akedah, or the binding of Isaac. Its interpretation sets the core foundation of Western religions.

In fact, without a word, Abraham takes and prepares Isaac for sacrifice. He ties him, places him on the alter, unsheathes his knife, and plunges the knife down to Isaac’s heart. But an angel of the Lord stops his hand, and Isaac is freed.

The Akedak teaches us the foundation of Western religion, which is based on the concept of faith. Faith constitutes the core relationship between God and man in all three Abrahamic traditions.

Man’s relationship with God begins where the senses cease. Our ordinary experience of the world is through our five senses and the mind. Thus, we know the world through reason. But God is without form, imbued with infinity, outside of the sensual-thinking realm.

Man cannot know God through our ordinary reason. Reason is the way we know our family, our culture, our history, math or movies. As God exists above reason, the bridge to God must be through faith.

Faith is the heartfelt knowledge that what I am doing is right, simply because I followed God’s wishes with total trust. A child murdered, which repulses us all, is neutralized by Abraham doing so in the service of God. Obeying the will of God is more important than any one life, or any desire or reason.

Faith is the belief in the absurd. The obvious will not happen. Miracles will occur; faith is not backed by reason or data but by the conviction of the soul in God’s righteousness.

Western religions have designed many ways to create the man-God relationship. Rituals, prayer, meditation, song, are all expressions of sense modalities. They are the staples of religious practice but constitute limited ways of really knowing God.

The anchoring relationship to God is through faith. Faith is the unquestioned acceptance that what God says is right because He is God.