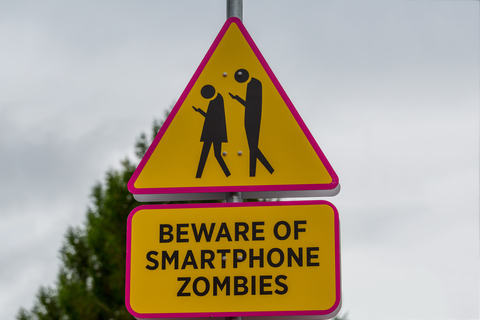 Maybe you’ve noticed the surge in ‘zombies’ that have invaded our walkways, highways, work places, and even our homes! They are very noticeable, but they won’t notice you as they are deep into a trance. Sometimes you will see these zombies walk in front of cars, but they don’t notice that you had to quickly react and move out of their way so as to not make a zombie pancake out of them. I am afraid that it is a pandemic and cannot be contained.

We have lost a whole generation to the zombie Smartphone virus, otherwise known as ZSV. At first it only affected the ‘twenty somethings’. Now it has spread to include the over 50’s population, but the scariest thing about ZSV is how it has infected children — some before they can even walk or talk.

I was shocked while out the other day, and witnessed the virus in action while a young couple were embracing! They were goners. The ZSV totally overtook them.

I had to do some research on this insidious virus. What I found was even more shocking than I originally thought. The following are stats taken from, “The Smartphone Generation: A Statistical Portrait.” Since 2007 when the Smartphone was released, high school kids have been hanging out less — spending 2.9 hours per day in 2007 now down to 1.9 in 2015, and projections for 2020 drop down to zero time spent hanging out together.

I also found this virus has affected young people’s desire to drive; I could not wait to turn 16 so that I could hit the road of freedom, driving to school, driving my friends around. Now I know so many kids that just don’t care if they ever drive. I guess this is setting us up for ZSV 2.0 which would be self-driving cars with no need to look up from their Smartphones.

Dating is also down from almost 90% of young people dating in 2007, to 30% in 2015. Dating with an actual human by 2020 is projected to be down to 5%. But not to worry. Companion robots will be on the scene to pick up the slack. Much to my amazement, these young people at the height of their sexual drive were reported to be having less sex; more than 65% less sex than reported in 2007.

But the saddest side effect of this virus is that more than 40% and climbing, our young people are feeling lonely and left out; even though they are on their Smartphones connecting almost 20 hours a day. As this insidious virus sucks the life from our youth, being an older adult does not make us immune.

The only way to avoid the “Zombie Smartphone Virus” is to go outside, talk with people, actually look them in the eye, smell the hot cider and donuts and laugh out loud with friends. Oh yes, scream and run the other way if you see the infected.

What I am truly concerned about is that I believe I’m infected!