Body Mind Spirit GuideFor a healthy body, an enlightened mind, and a renewed Spirit
More
Home ALL ARTICLES The Effect of the February 2018 Solar Eclipse on Michigan and the...
Facebook
Twitter
Pinterest
WhatsApp
Linkedin 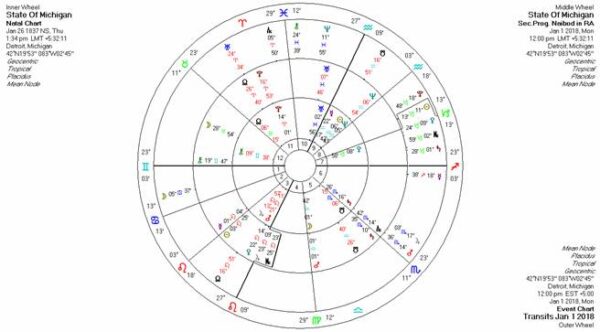 A solar eclipse will occur on Thursday, February 15 at 4:05PM Eastern Time at 27º Aquarius. This eclipse will be in direct opposition to the solar eclipse that occurred last August (28º Leo), which means that the effect of the February eclipse will be similar. However, because the February eclipse will be a partial eclipse and is only visible in the Southern Hemisphere, the effect will not be as intense as the solar eclipse last August. When looking at the effect of eclipses, they do not cause things to occur. They exacerbate the energies that are already there by intensifying the whole chart, not just what the eclipse aspects, and the effect is usually 3 to 6 months after the eclipse depending on the intensity. This will be a South Node eclipse which means that issues coming up are also around facing our past.

When looking at the State of Michigan chart using the January 26, 1837 Detroit, MI chart, we see the February solar eclipse will not have an effect — which means that whatever is going on in the Michigan chart will not be intensified. That is not the case with the US chart.

When looking at the US chart using the July 4, 1776 chart, we find that the eclipse will Quincunx the Progressed Neptune and conjoin the Natal Moon which intensifies this chart that is already dealing with a great deal of difficult energies.

Saturn (the planet that restructures, forces responsibility, and gets rid of that which is no longer necessary) will be in aspect to Jupiter (the planet that deals with the law, religious institutions, universities, charities, taxes, and a nation’s well-being), and Uranus (which deals with science, technology, electronics/electricity, computers, heavy industry, unions, and legislatures). We could see restrictions in these areas due to the changes in the tax laws, a restructuring of the legislature due to changes in which political party controls the congress, and/or restrictions with the unions due to the unfavorable climate with the party that is in power.
All the things that make this country pleasant to be in including the arts, fashion, social pleasures, and the entertainment industry (Venus) are going through a revolutionizing (Uranus) process at this time. We can see this in the entertainment industry with the “Me Too” movement addressing the sexual harassment that is so prevalent.

Mars (the planet representative of the forces that holds the country together or drive it apart through aggression, confrontation, and war) is in aspect to Pluto (the planet of transformation, death, and destruction). We see this with the internal violence that is being fueled by lies, and with our inability to effectively confront and hold boundaries with foreign powers. We will continue to see the US confronting foreign governments the same way that we have already been seeing; however, given that the energies from the previous eclipse were more intense than the eclipse that will occur in February we will probably not go to war.

Around the institutions and structures of our society (Saturn) we are being forced to face our illusions and misperceptions (Neptune). This also contributes to our disillusionment of our government and causes us to act and react emotionally instead of rationally. Neptune (the planet that rules our visions, dreams, glamour of our society, and also Oil and Gas) is in aspect to Transiting Uranus (the planet that revolutionizes through chaos and destruction). What is most relevant to this aspect is that there could be more volatility in the oil and gas industry; however, this could also be contributing to the violence associated with our symbols of history that are being distorted by hate groups and categorized as racist. Pluto (the planet that rules all that is hidden and secret in society) is being revolutionized by Uranus. This can be representative of changes to secret organizations (intelligence agencies like the FBI, CIA, etc.) where inadequacies in the institutions come to the surface, and they are being forced by changes in the way organized crime, terrorist organizations, etc. do business.

These are the energies that our country is going through at this time that are being exacerbated by the eclipse, and can be perceived as being very difficult. However, this country has gone through more difficult times than this, and we know that we can get through this. Also, after we go through these difficult times our country will be in a much better place.

Thank you to Chris McRae who taught me most of what I know about eclipses.

I have been studying Astrology for over 20 years and reading charts for over 10 years. This is a work of love for me. Astrology has been a tool I have used to help me understand myself, relationships I have been in, and help me through life events. This has given me the ability to give insightful advice about relationships and life changing events. Presently I have a thriving practice as entertainment for parties, working psychic fairs, giving private readings, and readings through an online service. I can help you to see what is happening in your life. To set up an appointment call me at (734) 434-0804 or e-mail me at richardmweber@sbcglobal.net Gift Certificates are available for friends and/or significant others!

What is the “Mature Masculine”?