Samadhi refers to a non-dualistic state of consciousness. This contrasts with our ordinary states of mind which are fundamentally dualistic.

The tools of the gross level of consciousness are our five senses: hearing, seeing, tasting, touching, and smelling, plus “mind” which is the consciousness and integration of sense material (thinking).

Dualistic consciousness is necessary for problem solving in the sensual world. Gathering information, manipulating and integrating facts and material, planning, and general problem solving are products of the gross level of mind.

The next level of mind is the subtle level. In the subtle level there is a subject-object relationship, but the relationship varies from the consensual reality of the gross level. In this state we recognize us as subject, but the object is drawn from an alternative universe. In this state the subject is the author, and the object is a creation of the subject, Hallucinatory and delusional phenomena are manifestations of the subtle mind. But the most common expression is in our dreams. In dreams we are aware of dreaming, but the objects of the dream do not reflect the mundane reality of the gross consciousness. Subjects fly, change shape, defy gravity, and these reflect imagination not photography.

The institutional refection of the subtle level is in the creative arts, archetypal images like Biblical characters — the Buddha, Moses, Krishna — cartoons, and superheroes. It is a level infused with the supernatural, with us as the dreamer/creator.

The highest level is the causal body. The common experience from this level of consciousness is sleep. In sleep, we are present but lack consciousness or awareness of objects or internal states. We are totally present, and one with the world.

In meditative experience this is Samadhi, a state of mind where there is complete harmony with the universe. This state of mind is sublime, meaning it is the wellspring, the actual source of consciousness. It is like electricity, or the raw power which fuels being and provides the motive power for all other forms of consciousness.

Samadhi is the highest state of consciousness. In Samadhi we are in total harmony with the universe. We access a type of pure consciousness which infuses us with primal energy.

Samadhi is non-dualistic; it is unitary. As the primal source of consciousness, it infuses or generates lower forms which split into dualistic forms found in the gross and subtle bodies.

From the spiritual-psychological perspective, the lower levels of consciousness are infused with this pure harmonic energy. When we open up the channels of pure harmonic consciousness, they infuse the lower levels. When channeled correctly from meditative state to mindfulness, this primal energy infuses the subtle level. It energizes creativity and ultimate purpose in our lives.

When the causal energy is translated into the gross level of consciousness, it creates thinking-feeling that is infused with love and compassion and relationships that are emphatic and non-reactive. Our day to day endeavors become infused with spiritual purpose.

Michael Abramsky is a licensed psychologist with 35 years of experience treating adolescents and adults for anxiety, depression, and trauma. He is nationally Board Certified in both Clinical and Forensic psychology.. has aanMA in Comparative Religions, and has practiced and taught Buddhist Meditation for 25 years. You may call him at: 248-644-7398 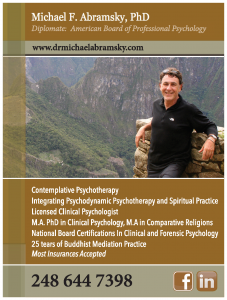