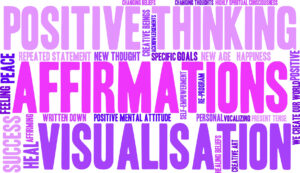 This article has been on my mind for some time; I’ve hesitated to write it because the principle of it is so simplistic – everyone knows that – right? Well evidently not. The premise is that positive affirmations can change your life. Even I had been skeptical. Yet only days ago a client called and told me that by using daily positive affirmations she had developed a new self-image and outlook on life. I gave her an affirmation that I give to literally all of my clients. It’s simple: Every day when you wake up, walk into the bathroom and look yourself eye-to-eye in the mirror and tell yourself, I deserve the very best today, and I do not accept anything less.

She attested that the idea had given her the courage to leave a harmful relationship, leading to a mutually affectionate partner. She further added that she had begun to feel an improvement in her self-image and confidence. That brought me to think of another life-changing event I experienced nearly 40 years ago when I worked for IBM. When IBM hosted an awards conference, they would bring in a Key-note speaker for the group. This was 1968, and IBM brought in the Reverend Bob Richards, who happened to be the Gold Metal Winner in the pole vault in the 1956 Olympics.

He told a very interesting story. At the time leading up to the Olympics he felt he was a good pole vaulter, but certainly not world-class. He said the best and worst day of his life was the day he got the invitation to the Olympic trials. He was uncertain if he was even going to go. He knew there would be vaulters there who were much more experienced, with higher vaults than he had ever achieved. There were a couple of months before the trials, so he took a chance, he called THE very best vaulter in the world, a Russian, and asked him if he could give him a few pointers. Not only did the ‘great one’ agree, he spent days with Bob teaching him everything he knew. Bob’s message to us was, “Ask the great ones, they will be happy to share.” What the teacher did next was the most remarkable thing. He introduced Bob to his team’s doctor, a Frenchman, who dealt with far more than physical injuries.

He explained that in his more than 25 years as a sports doctor, he had studied the mentality of high performing athletes. What he discovered by talking with the most successful ones and adding clinical research to the mix, was that from the first moment of a human’s ability to comprehend, our attitude about our lives and our futures are being formed in our minds. Whatever form of input we receive, establishes our personal expectation for our life. Heavy positive input can spell a trend for success. Too much negative input will turn the tables in a downward direction. Guess which attitude a majority of people in our world receive…

This indoctrination solidifies the foundation of our success quotient; it’s what the French refer to as “ide’e fixe” which translates into English as, Fixed Idea. Whenever a challenge is met, whichever idea is fixed in the athlete’s mind, takes hold, and their ability to move beyond the challenge is either enhanced or limited by it. The doctor’s research included a study with psychologists, psychiatrists, and neurologists. What he found is that it takes less than a billionth of a volt of energy to change your mind, and you generate many times more than that amount every time you sneeze.

The doctor became very successful by training athletes to remove or modify their ide’e fixe. He created many champion performances with athletes from every country in the world. What does your fixed idea hold? Bob Richards used positive mind training to help himself realize that simply because some people felt that something couldn’t be done, didn’t mean that no one can do it.
I heard a great statement while watching the Olympics this week. It was, “We are put here to do the impossible.” Another statement I read during our move from Michigan to Seattle; it was in a rest stop taped to a bathroom mirror, it read, “Relax, I checked with your destiny, and you are exactly where you are meant to be.”

Finally, the last thought was given to me by spirit during a recent meditation; it is simply that “Success comes from having the courage to do the things that you don’t have the courage to do.” Bob closed his lecture by saying that he felt that there were at least 25 vaulters in the world that could have beaten him that year, but they never even tried.

Here’s a second affirmation for you, “I can do anything that I set my mind to doing. All negative thoughts are merely motivational energies which will help spur me to higher and more successful efforts.”