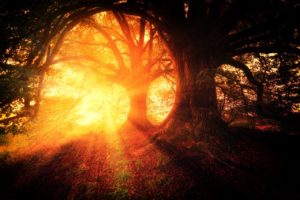 In the second half of the 19th century, under the leadership of Rabbi Yisrael Salanter, a spiritual movement called Mussar developed. The word Mussar has been translated as “correction” or “instruction”, but as it evolved it began to be referred to as “ethics”.

In Judaism, as with all monotheistic religions, the religious adherent’s goal is to move closer to God. Each religion has practices, which enhance and facilitate that movement.

In the 19th century Judaism the prevailing method of reaching God was mystical. Eastern Europe Judaism was under the sway of the philosophy of the Baal Shem Tov, a 15th-century spiritual leader who advocated the loss of self as a way to bring God into one’s life. Mystical approaches generally advocate practices, which empty the self or ego, with the empty space being filled-in by God. It is our ego or self-interest, that blocks us from God. The loss of ego is filled with God’s presence.

In contrast, Salanter saw the path to God as filled with ethical challenges. The resolution of ethical issues was seen as the path to bring us closer to God. It was more of a rationalist approach than a spiritual one. It elevates the ego processes of goal setting, and developing strategies to meet those goals.

Mussar then outlines techniques for developing such God traits and incorporating them into one’s daily life. Central to that development is the concept of balance.

Let’s take humility. Humility, as a Biblical concept, essentially means knowing one’s place in the world. We are in balance when we practice proper humility. We are imbalanced when we have too little or too much humility. Too little humility is characterized by self-inflation or narcissism. We think too much of ourselves. We see ourselves as infallible, faultless, and perfect. Too much humility is characterized by underplaying our good qualities, hiding out, not taking credit for our good works, and underplaying valuable strengths.

1. Sensitivity: The first step is to be sensitive to how those soul-traits manifest in thinking, motivating, and acting. For example, if humility is a dominant soul-trait for you, you need to be aware of when you are too humble, or too self-centered. Awareness is the foundation of all spiritual and psychological practice.

2. Self-Restraint: Judaism places a great emphasis on choice. Traditionally, man is seen as having a dual nature with both good and evil inclinations. A man then chooses which path he follows. God supplies the mental architecture, but we make the choice; once we have awareness we gain the ability to choose. Self-restraint is one such choice.

3. Transformation: We want to change that problematic soul-trait, to uproot it until it no longer is an impediment to holiness (wholeness). Utilizing a focused “soul” diary, a themed meditation, using a daily reminder phrase to begin your day and a bedtime practice where one reflects on how that trait manifested during the day, are all fundamental to Mussar transformation.