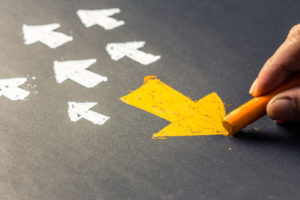 Independence is when you can follow where the spirit leads you without negative forces blocking your path. G.EscoDavis

Think of when you were a child, a teenager, in college or even older, when you desired to be part of a group – a need to belong to something, to be part of something. Perhaps you joined a club, sorority, fraternity, a book club, traveling group, girl scouts/boy scouts, work buddy’s, etc.. At some point your thought process began to shift and expand beyond the group; not thoughts of anger, just different –- independence in thought and actions.

When we become silent, in meditation or by being alone on a walk or a run, when our thoughts are independent and free from the control of noises and the outside world, we can then focus on the experiences we are in at present. We can minimize any resistance, in itself quieting the mind. We become aware of self; body, mind, and spirit. Once we become centered -– knowing who we are in principle and morals — our authentic self emerges -– it becomes a path to independence.

During a summer several decades ago, there was a young girl who wanted to be part of a group, to have friends. All of her friends were two-to-three years her senior. One Sunday afternoon she was going to her girlfriend’s house -– it was the house where everyone hung out. Before she left home, her mother told her not to get in a car with boys, and to be home before the streetlights came on.

We will call her, Cookie. So Cookie goes over to her friend’s house, where six others were waiting for her. They were going to the park. So seven teenagers piled into one of the boys’ car, and headed to the park. On their way, the car broke down. No one but Cookie had bus fare to get home, but she was not about to leave her friends.

The wisdom of the oldest was to hitch-hike home. One girl was chosen to hitch-hike a ride, then all would jump in the car. Within minutes a car stopped, and they all jumped in. The driver was not happy that all these teenagers were in his car. He only took them a few miles then put them out of his car.

The next morning all the mothers of the other teenagers’ called Cookie’s mother. They knew Cookie would tell the truth. As a result, all of Cookie’s friends were on punishment for the summer, leaving Cookie all alone for the summer.

During that summer Cookie began going places she’d always wanted to go -– but no one else in the group cared to go. She began going to the local library, the museum, theater productions, the movie theater, and reading books of real interest to her.

When school resumed, Cookie had no friends. So she became a loner, and she was okay with that. Being part of any group was no longer a priority. At the age of 14, Cookie became independent, unaware that this single event was a turning point in her life. Her life continued to be a life of independence, in thought and action.