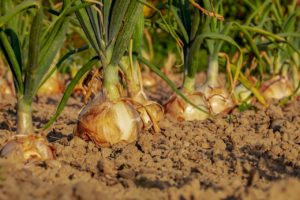 With each spoonful of today’s food, we are unknowingly slowly killing ourselves. I am not talking about potential toxins, antibiotics or preservatives that they may or may not contain; I am talking about what our modern food does NOT contain. What do you ask? How can something that is not in our food be slowly killing us?

You see, we are not the first society to unknowingly destroy its food supply. The Roman Empire and other ancient societies around the world that declined had chemical-free tilled fields, so organic vs. inorganic or GMO was not the issue. Soil depletion is the common issue time after time in these ancient societies.

How is soil depleted? The soil is like your checkbook. Unless you put enough in to cover the checks you are writing, eventually, your account will be overdrawn. The soil is constantly being depleted by a number of factors. 1) Water dissolves minerals in soils and gravity leaches (pulls) those minerals below the root zone making them unavailable to plants. 2) Wind and water erosion can blow or carry away soil minerals. 3) Crops grown will chemically “mine” whatever minerals are present in the soil.

After constant cropping, the trace minerals are gone. But we add fertilizer, don’t we? Conventional farming methods add three macro minerals (Nitrogen, Phosphorus, and Potassium) back into the soil and maybe a few trace minerals if the farmer can afford it. Another issue that has developed since 1994 is that we are on purpose, chemically chelating (making minerals unavailable by chemically surrounding them) certain minerals as a form of weed control. All these factors are contributing to the sad fact that we are producing food that has very little mineral density and we are producing “empty calories.” Farmers are paid in tons and bushels, NOT in mineral content.

So how did the ancient societies deal with this problem? The Romans conquered Egypt for their wheat. They knew that Egyptian wheat enabled their army to march further and fight harder than wheat grown anywhere in the Mediterranean. What was the difference? The Nile River flooded every spring and renewed the soils with silt (minerals eroded and carried from melting snow on mountains in Africa). Egyptian wheat was very mineral dense.

In a National Geographic article, archeologists have proven that some societies in equatorial regions with high soil mineral depletion like Central America, the Pacific, and Africa, resorted to cannibalism by conquering neighboring tribes. They would sacrifice them to their deities, then cook their flesh in every fashion as a food source. Then, they took the boiled and de-fleshed bones (used for bone broth) and stored them in huts and caves until planting season.

When planting season came around they would use the bones in ritual ceremonies to promote a good harvest. Finally, they would grind up the sacred bones, use them in food as a culinary spice and use them as fertilizer for their crops. Thus enemy tribes competing for soil resources were consumed in every sense of the word to get their minerals. This gives us a whole new perspective of Jack & The Beanstalk’s, “Fee-Fi-Fo-Fum; I smell the blood of an Englishman. Be he alive or be he dead, I’ll grind his bones to make my bread.”

In the American West, homesteaders would establish small farms and after several years their crops would become stunted, cattle would be stillborn and children would start to be born with physical or mental birth defects. They would simply pick up and move further west and repeat the cycle. The soils had been depleted. They pushed the Native Americans off the virgin soils into reservations at gunpoint until we got to the Pacific.

Our federal government has officially known about “death by depletion” since 1936 as evidenced by Senate Document 264. In 1992 at the Earth Summit, it was reported that North American soils were 85% mineral depleted. It is too expensive to economically fix our soils on a huge scale because farmers are only paid on yield, NOT mineral content. Rather than fix the soils, farmers resorted to giving their animals vitamin and mineral supplements in their feed to deal with the problem. William A. Albrecht, a soils professor at the University of Missouri during the 1940s-1950s, experimented with putting trace minerals back into the soil and got dramatic results in improving quality of crops and the animals that ate them.

Dr. Joel Wallach DVM, ND, took Albrecht’s research to the next level by necropsying over 17,000 animals and autopsying over 4,000 humans for comparison which led to his discovery that all humans require 90 essential nutrients to achieve and maintain optimal health. Of the 90, two-thirds of the ninety are minerals. “Essential” means the body cannot manufacture them. They must be consumed every day to replace what is lost through sweat and bodily elimination. He discovered animals and humans that died of the same diseases actually died of the same nutrient deficiencies. Wallach also discovered in his research, that each of the 90 Essential Nutrients was linked to at least 10 diseases. Thus, if you are depleted of 60 of the Essentials, you may be susceptible to 600 diseases.

In conclusion: 1) We are producing foods that are “empty calories” practically devoid of vitamins and minerals. Because of modern transportation, food comes from all over the world and there is no guarantee of what soils they were grown in and what mineral density they have. 2) Not everyone has enough land to produce their own food and put trace minerals into their garden. The solution to “death by depletion” is simple. We must follow the farmer’s lead they practice with their livestock by supplementing ourselves with the 90 Essential Nutrients to obtain what is NOT in our food. Thus the cry, 90 for Life!

In a future article, I will explain what are the 90 Essential Nutrients discovered by Dr. Joel Wallach DVM, ND (veterinary research pathologist and human naturopathic doctor), and how to obtain them economically.

David Mellor taught agriculture/plant/animal and human biological sciences for over 25 years. He was named Michigan’s Outstanding Agriculture Science Educator by Michigan State University in 2017, served as a Farm to Table teacher trainer for the FDA’s Food Safety & Applied Nutrition division, and serves on the Scientific Advisory Board for Youngevity International. Visit: www.ultimatehealthworks.com Text/call: 734-216-6677