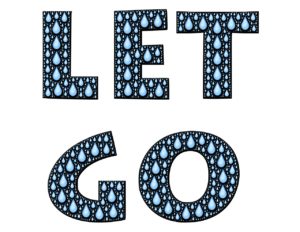 What are you….a victim or a villain? In just about every scenario that you hold on to, and mentally revisit, you’ll find that to be true. You’re a villain when you say or do things that hurt others — whether on purpose or not. You’re a victim when you receive that negative energy from someone else.

One thing stands true, no matter which role you play — no matter how many times you rethink a situation, it won’t change what happened. In either case, though, you end up carrying the baggage of emotions like guilt, anger, and resentment, with you as you move forward.

And, what does that do? It steals away your body’s energy and robs you of being fully present to enjoy life to its fullest.

Why? Why do we continually throw energy toward things that we are powerless to change?

Have you ever heard the expression, “You’re going to worry yourself to death over that!”? In a weird kind of way, there’s actually some truth to that. We are energetic beings that illuminate physical bodies, not unlike a hand animates a glove.

The same energy that powers the mind, gives life to and sustains, the physical body — our vehicle for this experience here on earth. To redirect that power away from these things is like kinking a garden hose while trying to water your garden. Your overall health-mental, physical and spiritual — is deprived of this energetic food. You end up living in a world filled with anxiety, stress and dis-ease.

So, do you still think that directing your energy to things of the past is worth it? Are you really willing to sacrifice your well-being for the sake of this? There is another way. A better way.

When everything that you say, do and think comes from a place of unconditional love, you can release the need to replay the past. You can be at peace with yourself and be fully present to enjoy the present moment.

Regardless of whether you need to forgive yourself or someone else, the result is the same — being able to confidently move forward without feeling the need to look back. You can’t go back and change the past, but you can always heal the wounds and move forward in a new way.

If it’s guilt that you’re feeling, perhaps a simple apology can release it. If that’s not possible, you can still decide to let go and resolve to change your behavior from this point forward.

Maybe, though, you’re holding onto anger from something that was done to you. You still have the option to release it through the act of forgiveness. Now, before you dig your heels in, forgiveness is not about condoning the bad behavior of others. It’s about releasing the weight of thoughts that aren’t serving you in a positive way and empowering yourself to move beyond it. After all, holding on to anger isn’t punishing anyone but you.

So whether it’s guilt or anger, you have the choice of whether to re-live or release those emotions and redirect your energy toward sustaining a healthier body and a happier life.

It’s your choice. Choose to live a clean life. Not just by eating organic foods, exercising and drinking plenty of water, but by thinking, speaking and acting from a place of pure love. These actions will help to align you with your highest self. And, that which we are in alignment with, brings us more of the same.