Body Mind Spirit GuideFor a healthy body, an enlightened mind, and a renewed Spirit
More
Home ALL ARTICLES Do You Believe You Are Enough?
Facebook
Twitter
Pinterest
WhatsApp
Linkedin 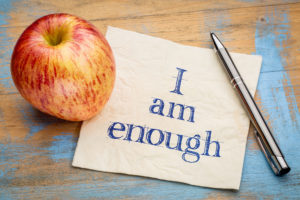 Marisa Peer, psychologist, hypnotist and author, and voted one of the best therapists in Britain, relates an interesting story. She was asked to see a very rich and famous American actor who was ‘having a meltdown’ and walked off the set. Before she went to his house, she was told not to let him see the Mustang she was driving. If it wasn’t an extremely expensive car, such as a Porsche, he would not see her. She parked around the corner and walked to his house, which was very large and beautiful.

When she arrived, he proceeded to insult her and discount every nice thing she said to him. Finally, she said, “I know what your problem is. You don’t think you’re enough.” Tears came to his eyes as he asked, “Do you really think that is the problem?” She said she was sure of it. She had the celebrity use the affirmation “I am enough” repeatedly and even wrote it on his mirror. A number of weeks later she ran into this fellow and his whole life had changed. He had lost a great deal of weight, bought a less expensive car, moved from his luxurious home, and said he was now dating his hairdresser. He told her he was actually happy now. In addition, he was amazed that this huge change was all due to those three words, “I am enough.”

The above story demonstrates how powerful affirmations are. In addition, it shows that beliefs that are formed in childhood can affect our entire life. This man came from a very poor background, and his father would rather give the extra food to the dog than to his son. Because the father didn’t even like his own son, the son’s needs were not met, which resulted in numerous problems. In this case, the actor believed that he wasn’t enough, and had to go out and prove this was not true. However, even after gaining fame and wealth, he still felt inadequate. He had never gotten to the root cause of the issue.

The problem is that when we are children we idolize our parents; they can do no wrong. Unfortunately, many parents do and say things that are extremely harmful to their children. Since the parents can’t be wrong, the children believe it is they who have the problem and form erroneous beliefs about themselves, such as they are not smart enough or good looking enough or capable enough or loveable enough, etc. These beliefs are accepted by the subconscious part of the mind and can remain lodged there your entire life if they are not challenged. In addition, once they are in the subconscious mind, you are not consciously aware of them, and so are unable to examine them to see whether they are true or not. And how can you change a belief if you are not even aware that you have it?

This is the problem that many of us face. When we are growing up we receive all kinds of messages, both positive and negative. Unfortunately, since we are too young to analyze these messages, we accept that they are true. When we become adults we still act as if these damaging and irrational beliefs are true. These can affect our jobs, our relationships, our financial success; in fact, virtually every area of our life.

What, then, is the solution? You need to become aware of the destructive beliefs that are ruining your life, and to challenge them and replace them with much healthier and more rational beliefs. Once this is done, you are in a much better position to get what you truly want and need out of life.

An excellent method for locating these subconscious beliefs is through the use of hypnosis. Not only is it effective, but normally only a few sessions are required. If you would like to find out if hypnosis can be of benefit to you, please call Phil Rosenbaum at 248-688-6469. You can learn to believe that you are enough.