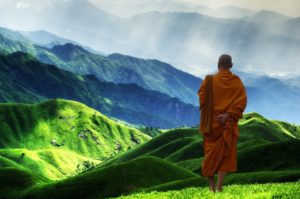 I am in the process of traveling to Bhutan. I began researching their particular form of Buddhism.

Bhutan became Buddhist in 600 AD, one-thousand years after their neighbors in the south. As such, their native traditions and customs survived more intact than their southern neighbors. However, like the Buddhism of Southeast Asian, all activities from festival dances, to government actions to art, serves the singular purpose of encapsulating and the promulgation of the basic Buddhist principles of personal enlightenment (nirvana), and transformation.

The original “religion” of Bhutan is Bon. Like many beliefs of the old world, Bon sees the world as populated by deities. Every locality, mountain, lake, river, every tree grove, is protected by deities who must be satisfied in order to protect the order. Most people have personal deities, and each day they honor them by giving offerings. In the modern world, gifts are given through Buddhist monks who go from home to home, in exchange for blessings.

The unique blend of folk traditions and Buddhism gave rise to a new school of Buddhism. Originally the Theravada tradition dominated Buddhism. It preached liberation but demanded the traditional life of a monk in order to achieve this goal.

The second school, Mahayana, focused on the concept of a bodhisattva, or a Buddha in training, who forgoes such enlightenment in order to aid others in their journey to enlightenment.

In 600 AD, a new school, Vajtayanna, emerged. Aside from traditional Buddhist teachings, Vajrayana promulgated Tantra, or a specific set of esoteric teachings.

Tantra advocates a different sort of meditative experience. Meditation, as taught in the west, largely focuses on emptying, or clearing the mind of thoughts, feelings, and sensations. In contrast, Tantric meditation tries to create a spiritual evolution through imagistic meditation.

For example, the ‘Green Tara’ is a goddess of compassion. A Tantric technique would be to meditate on the image of the Green Tara, to draw an imagistic line between you and her, in an effort to transfer the energy of compassion. Through such a technique one develops compassion in one’s self.

As with all Buddhist practices, there is an overarching need to always focus the mind. Consequently, even the physical accouterments — prayer flags, prayer wheels, various symbols — are all vehicles to focus the mind and channel it into the qualities of compassion, love, and gratitude.

As with most Eastern religions, Bhutanese Buddhism is a lifestyle. It pervades all aspects of art, culture and daily life.