Body Mind Spirit GuideFor a healthy body, an enlightened mind, and a renewed Spirit
More
Home ALL ARTICLES The Mighty Diaphragm – The Muscle That Can and Does – How...
Facebook
Twitter
Pinterest
WhatsApp
Linkedin 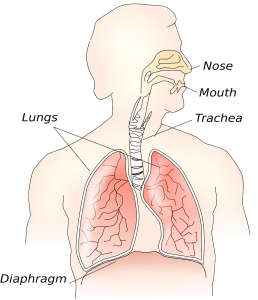 In the popular 1930’s children’s storybook, “The Little Engine Who Could”, the author Matty Piper, tells a wonderful tale about a little blue train engine who came upon a train at the base of a tall hill whose engine had broken down and could go no further. The train is filled with toys and food that the children are waiting for.

The diaphragm in your body is a lot like that little blue engine that could. I say that because your diaphragm is somewhat small for its workload but definitely mighty. This vital muscle in your body is the primary muscle of respiration. It functions as a wall or partition between the abdominal cavity, thorax, lungs, and heart above it.

The heart rests atop of this dome-shaped muscle. The movement of a properly functioning diaphragm creates a pressure that pulls in air and generates our breathing. The diaphragm helps the kidneys by massaging them 24 hours a day through it’s movement and increases the natural functioning of the vascular and lymphatic system. With all of these bodily units working together, there is an increased nourishment supply to the organs surrounding it. You could say that this amazing muscle contributes so much to the body’s homeostasis that it is well on its way to being a proto-organ and it knows what it has to do and keeps doing it over and over unless we prevent it. Watch a baby as it breathes and you will notice that its belly rises and falls with each breath, and that rhythm generates a subtle but powerful ripple of energy and movement throughout the body.

The majority of people do not naturally experience full diaphragmatic breathing, and that is why we have so many people who breathe shallowly and from their upper chest. This results in them not having as much energy as they could have. Another side effect is the dulled perception of one’s own life force or chi. Additionally, when a person does not breathe fully and cannot utilize their abdomen and chest, they are more vulnerable to external and internal stressors, resulting in ever more compounded tension stored in the body. Can you imagine where this progression is headed? That’s right …even shallower breathing and stress-related diseases like hypertension.

Over a lifetime, there are a number of reasons why the diaphragm’s effectiveness is reduced. In some cases, when a person suffers a traumatic experience, the diaphragm can literally be locked down or go into diaphragmatic shock. Once when I was doing a session with a five-year-old, I saw right off that his diaphragm was barely moving and it appeared to be sucked upwards from the bottom of his rib cage. Fortunately, after a few minutes of structural bodywork aimed at lengthening and releasing the anterior attachments of this muscle, his breathing changed dramatically, becoming deeper, smoother and slower. As this five-year-old experienced this new breath, his facial expression changed from one of “frozen” worry to a smile.

Scar tissue in the abdomen from surgery can also severely restrict breathing. Just this week I was working on a 70 something male client who had a surgical scar just under and running the entire length of his diaphragm. As the scar tissue was released, he was able to breathe easier and deeper than he had in the four years since the surgery. He could also stand a lot taller.

If smaller energy reserves and greater potentially life-threatening stress and tension were not serious enough, there is another often overlooked consequence of the diaphragm’s restriction. As both of this muscle’s attachments and connective tissue (fascia) that envelopes it shorten, the overall space/volume in the rib cage and chest can be compromised and posture greatly affected. In fact, Rolfers and Structural Integrators often find that a forward head posture cannot be resolved without lengthening the diaphragm’s fascia. Oftentimes, clients with asthma say that as we released their diaphragm and opened up their rib cage, their symptoms would recede.

Certain types of healing exercises including yoga exercises, Cranial Sacral and Structural Integration (AKA Rolfing) can do much to normalize the diaphragm. With the Rolf method, the work on the diaphragm will support your standing tall and balanced in the gravitational field of Mother Earth.

So, like the little blue engine who drove the train filled with toys and food that the children were anxiously waiting for, your properly functioning diaphragm, moving through its up and down cycle 23,000 times a day, can deliver the necessary helpful elements that are so vital to your body. This Holiday season, why not give yourself the gift of full and easy life-giving breath!