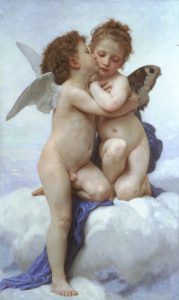 February is an especially busy month for Cupid. With Valentine’s Day coming up on the 14th, Cupid doesn’t have much time for matchmaking. Then, after the matches are made, it will be approximately six months to a year-and-a-half before the other saints and the big guy himself are asked to step in and help these couples figure out the real “how-to” of lifelong bliss. I’m not being pessimistic but rather the herald of great news. When a relationship reaches this point, it isn’t over, it’s just the real deal starting. Read on to learn how you can make your relationships flourish.

Human relationships are complex. Other relationships in the plant/animal kingdom don’t appear to be as complex; but who knows, we are here and they are there. Observing their interactions makes me think they are one up on us in these areas. If you’re not in a relationship but would like to be and don’t know where to start, use the universal magic formula to create what you want.

Take a blank 8 ½ by 11-inch sheet of paper and write down in detail what you want and what you’re looking for, along with every intimate detail. When you’re done with words, draw pictures. The more detail, the faster you will find your mate. If you change your mind about some part, no worries, just scratch it out and fill in what you want. We live in a matter/energy universe, so go ahead and transform your energy into matter — or actually into your love interest! This exercise is what will help you to recognize him or her.

Now let’s look at two relationship phases and guidelines to help relationships last: Phase one confuses many people because it’s SO good! In this part of the world, we’re allowed to choose our mate. Our choices are based on what’s important to us and/or whatever attracts us to them. This part of attraction is interesting because whatever we believe our attraction to be, and what it actually is, often varies. This is because the attraction we feel comes from a very primitive part of our brain.

This first phase is usually magical. It’s the phase in which we’re sure we’ve found our soulmate. Our love interest often likes everything we like, including food, entertainment, and thoughts of future family. It feels literally painful when we aren’t with them. It is a great experience so hang onto its essence as it will be the model for building the relationship we want.

Do you remember one of the first robotic toys called a Furby? A relationship that doesn’t get fed is like a hungry Furby. Even the best relationships must be properly fed to continue being wonderful and successful. In the same way that the magical beginnings of relationships are nature’s way of ensuring the continuation of the human species, properly nourishing a relationship is essential for its growth and survival. When we have both a partner and a group, history shows that the odds of survival improve — that we tend to live longer and healthier lives. Good relationships are good investments!

In the second phase of relationships, the rose-colored glasses come off and reality sets in. You may find you do not like all the same movies or the same food, and he or she can’t keep skipping days off work to go to the beach with you. But hang in there as there’s still a ton of good things that will make life for the two of you exciting and worthwhile.

Most relationship experts say that when things start getting rocky we should go back and look at what attracted us to each other in the first place. This makes sense even if the couple started hanging out together because it was better than being alone. And even this may have merit for some people. Consider the success rate of arranged marriages where people started with nothing more than the good intentions of their parents to create good families.

This second phase is where you take all the things you now know and love about your significant other and begin to appreciate them with a deeper understanding of how you can create a life together. This phase is the big work with the big payoffs as you gain a lifelong friend and partner in the adventures of life and family.

One of the things I learned to do as a Certified Wellness Doctor is called, Couples Integration. Sometimes I think it would be more appropriately called, Couples Re-integration. When I watch two people that have been together (happily) for a long time start to make remarks of an unkind nature to each other or about each other to others, I can test them as a couple. Often I find they’ve become allergic to each other. In the Integration process, we clear the allergic response between them on a biophysical level. Either the romance returns or they look at each other and realize they should not be together as a couple and part as friends rather than hateful enemies.

In closing, I want to cover another aspect of relationships which deals with beginning a new relationship after having had a good, successful relationship prior in one’s life. It also applies to people that almost had what they wanted. The main premise is to understand that all relationships have their own new set of rules which are often vastly different than those from previous relationships.

Relationships are akin to playing with tinker toys or blocks; the components are the same but can go together in many different ways. You may not want to disassemble your last toy because you liked it but you need to do it anyway so you can build something new and different. Your last toy (relationship) may have been great but the new one won’t be unless you’re willing to build it fresh from the start. Happy Valentine’s Day!