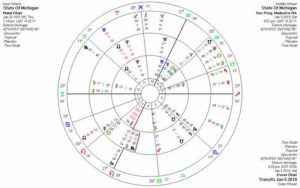 A solar eclipse occurred on Saturday, January 5, at 8:27 pm, Eastern Time, at 15º Capricorn. This eclipse is a partial eclipse and only visible in East Asia, the Northern Pacific, and Southwest Alaska, which means that the effect will not be as intense as the eclipse in August 2017. When looking at the effect of eclipse’s, they do not cause things to occur; they exacerbate the energies that are already there by intensifying the whole chart, not just what the eclipse aspects and the effect is usually 3 to 6 months after the eclipse depending on the intensity. This will be a South Node eclipse which means that issues coming up are also around facing our past.

When looking at the State of Michigan chart using January 26, 1837, Detroit, MI, chart we see the February solar eclipse will square the Natal and Progressed Pluto which intensifies the difficult aspects in this chart. The following are the aspects to the Michigan chart:

The Sun (which represents the leader, or Governor of the State) is in hard aspect to Uranus (which revolutionizes). Gretchen Whitmer (the newly elected Governor of Michigan) will experience a great deal of chaos which is indicated due to the Legislature being Republican and the Governor is a Democrat.

The Moon (which represents the people and water) is in hard aspect to Neptune, Uranus, and Mars which means that there is confusion, fear, chaos, and confrontation within the masses and continued difficulty with the State’s water supply. We will continue to see the polarization of ideologies without compromise due to the fact that people are acting and reacting out of their fears and confusion.

Mercury (which represents the auto industry, all forms of communication, and the roads) is in hard aspect to Uranus. We see this with the auto industry having to close plants, layoffs, etc., to reposition themselves to adapt to future perceived changes in the market. Also, with this influence, Gretchen Whitmer will probably have a hard time fixing the roads.

Venus (the planet that represents all the things that make life pleasant including money) is in aspect to Pluto which indicates there probably will be issues with money. The layoffs and plant closings by General Motors is just the beginning of the belt-tightening that will be going on. This will also make things difficult to fund any new initiatives by the State.

Mars (which represents crime, criminals, law enforcement, and lawyers) is in aspect to Pluto, Uranus, and Saturn. We are seeing instances of what appears to be inappropriate behavior by police in their dealings with others that sometimes seems criminal. This is bringing to the surface problems that need to be addressed with our law enforcement agencies so that they can more effectively serve the public good.

Jupiter (which represents common beliefs, religion, and the legal system) is in aspect to Pluto and Neptune. This is bringing up our issues, fears, and misperceptions contributing to the polarization of our common beliefs. Also, the clergy is still plagued with the problem of pedophile priests.

Chiron (the planetoid that has to do with self-care) is an aspect to Pluto. Under this influence, Michigan is facing issues around taking care of ourselves. This includes all aspects of our lives including financially, socially, etc.

North and South Nodes are in aspect to Pluto and Uranus where we will be pushed to face our issues and be true to ourselves around moving forward in our lives.

When looking at the US chart using July 4, 1776, chart we find that the eclipse will Oppose the Progressed Jupiter and Square the Natal Saturn which intensifies this chart that is already dealing with a great deal of difficult energies.

The following are the hard aspects from transits to the US chart that we are dealing with at this time:

The Sun (which is representative of our national identity and our leader, the President) is in positive and challenging aspect to Neptune (the planet that pushes us to face our illusions and misperceptions, and gives us clarity). When looking at our national identity we are seeing a lot of confusion that is indicated by the people acting and reacting out of emotions (especially fear) instead of clear rational thought. Many people are tired of being told that their politically incorrect thoughts, feelings, and behaviors are unacceptable. Because of this people are acting and reacting in an emotional and irrational manner. The people in a country are the purview of the Moon in mundane astrology; however, the people in a country also help to define the national identity which is the purview of the Sun.

Saturn (the planet which restructures, forces responsibility, and gets rid of that which is no longer necessary, and restricts), Neptune, and Pluto (the planet of transformation, death, and destruction) will be in aspect to Mars (the planet representative of the forces that hold the country together or drive it apart through aggression, confrontation, and war) which can cause difficulty. We see Pluto with the internal violence that is being fueled by lies, and with our inability to effectively confront and hold boundaries with foreign powers. With the Neptune influence there is the confusion around how to appropriately confront, which contributes to erratic and irrational behavior. With these influences we could over-react or under-react. With the Saturn influence we see restriction in our dealings with other nations which also contributes to our nation under-reacting. We will continue to see the US confronting foreign governments, and with the addition of the Neptune energy we could over-react and go to war; however, with the Saturn influence we will be overly cautious.

Uranus and Neptune will be in aspect to Saturn (the planet that represents established structures, Congress, politicians, police, and taxes). We see this with the chaos that has been going on with our political system. There has been a polarization between Democrats and Republicans for a long time; however, we are seeing instances where Democrats and Republicans are collaborating, and sometimes they have displayed honor and respect for each other. Another result of this influence is that the House of Representatives is now under the control of the Democrats. This is a continuation of the political fluctuations we have been seeing the last few years. As a result of this process our political system is going though changes and we are being pushed to face the truth.

Pluto is in aspect to Neptune, the planet that rules social programs, collective ideals, and oil. Right now there are differing opinions about who we are as a nation, what our ideals are, and what we represent. What is interesting is that the fighting intensified when the eclipse occurred.

Pluto is also in aspect to the North and South Nodes (which has to do with our past and our future) and to Chiron (the planetoid that deals with self-care). Our country is going through a major transformational time where we are being pushed to better learn how to take care of ourselves, to face our issues from the past and our issues around moving forward in our lives.

These are the energies which our country is going through at this time which are being exacerbated by the eclipse, and can be perceived as being very difficult. However, this country has gone through more difficult times than this, and we know that we can get through this. Also, after we go through these difficult times our nation will be in a much better place.

Thank you to Chris McRae who taught me most of what I know about eclipses.