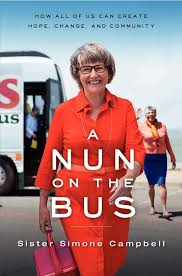 Too often we hear that if people “just work hard and play by the rules” they will “get ahead.” We also hear that people living in poverty are lazy and don’t want to work; the term “welfare queen” is used to negatively frame women living in poverty. Sister Simone Campbell of the Nuns on the Bus fame explains that these misconceptions and stereotypes, are light years away from reality, and are used by some for gaming the system for financial gain.

Sister Simone Campbell is part of NETWORK, an organization which advocates for economic justice. Sister Simone has conducted multiple Nuns on the Bus tours, driving thousands of miles across the United States to speak for justice, advocate for fair federal policies and empower citizens – especially low-income people – to self-advocate and vote.

Sister Simone has advocated to make the tax code more progressive, raise revenue to support programs that invest in people and communities, and decrease inequality. She maintains that the recent tax laws fail to do this; in fact, it adds $1.9 trillion to the federal deficit over ten years, draining the treasury of valuable revenue for human needs programs.

Ensuring that all people have access to quality, affordable healthcare is another goal of Sister Simone. Under the Affordable Care Act, she advocated that all states adopt the Medicaid expansion. For the longer term, she supports the implementation of Medicare for all.

Sister Simone also supports immigration reform, recognizing that we were all once immigrants looking for a better life. She states that the broken immigration system should be repaired, providing a pathway to citizenship for undocumented immigrants, and protect family unity. Ultimately, she says that we should identify and address the root causes of immigration throughout the world.

Sister Simone is an amazing voice for social justice. “She is unstoppable,” said University of Michigan Business Professor, Michael Gordon.

Sister Simone has mastered the ability to identify the factors that cause poverty and misery and then clearly explain these factors in a way that is easy to grasp. Those fortunate enough to hear her presentations about how our economic and political systems create poverty, appreciate the clarity with which she speaks and is grateful for their improved understanding of the underlying causes of poverty and the means to address them.

Hear Sister Simone Campbell speaking on Mending the Gaps – Why So Many Feel Left Behind, in Ann Arbor on March 31 at 2:30 pm, at the Bethlehem United Church of Christ, located at 423 S. Fourth Ave., Ann Arbor. Tickets cost $20 and $5 for students. For more information and to purchase tickets, go to the webpage: https://results.salsalabs.org/sistersimone Funds benefit the RESULTS Education Fund.

As Sister Simone Campbell and NETWORK, RESULTS also works to end poverty. RESULTS is a movement of passionate, committed everyday people that use their voices to influence political decisions that will bring an end to poverty.

“I think the frustration of so many is, ‘What can I do to make a significant change?’” offered Carol Hafeli, a retired speech and language pathologist who has volunteered with RESULTS in Ann Arbor for the past four years. “I’m impressed that RESULTS is so proactive and has a 38-year track record of a small group making a large impact. I marched with millions of women in Washington, D.C., but that doesn’t move the policy needle as much as the slow and steady dripping on the rock we do as part of the coordinated national coalition of RESULTS groups.”

Across the United States and around the world, RESULTS advocates for ending poverty, domestically and globally, working through their elected officials, and through media outlets. Locally, RESULTS groups in Ann Arbor and North Detroit carry out the work of RESULTS in Michigan. As unpaid volunteers, these local RESULTS volunteers meet with Michigan’s U.S. Representatives, including Debbie Dingell, Rashida Tlaib, and Tim Walberg, and Senators Debbie Stabenow and Gary Peters, to change policy and implement programs to address poverty.

“I am proud to be a member of RESULTS because the voices of individuals who have lived in poverty are valued, and perspectives that have been left out of conversations on Capitol Hill for far too long are centered in all of our advocacy work,” said Susan Fleurant, a first-year University of Michigan law student. “RESULTS elevates the strengths and contributions of young advocates and empowers people from all backgrounds to recognize their potential to make a difference through advocacy.”

Attending the Mending the Gaps event with Sister Simone Campbell on March 31 will allow you to meet Sister Simone, learn about NETWORK and the work of Nuns on the Bus to end poverty. You will also be introduced to the work of RESULTS and meet RESULTS activists. It should be a fascinating afternoon.