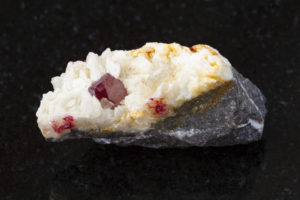 Cinnabar has been used since 5300 BC in places and cultures all over the world, such as Rome, China, Mexico, United States, Peru, and Spain. It was used to stain figurines, pottery, tombs of the elite, furniture, tattoos, painting, and in ceremonies. In East India, Cinnabar means, “dragon’s blood.” Its vibrant red triogonal crystals are where the color vermilion comes from. Cinnabar is made from HgS, which is a mercury sulfide, the important element that makes mercury.

We now know mercury is toxic and is being replaced with other pigments that make vermilion. Some stones containing Cinnabar are polished and coated with a eurithane coating that makes them more stable from its soft 2.5 hardness, also making the mineral so that you can hold it.

Rare Cinnabar crystals form near volcanoes can be purchased, but be careful to not handle it often or inhale the dust. Cinnabar is a stone of transformation in magic, healing, and alchemy. It’s been used in numerous remedies in Chinese medicine, aiding in fertility, blood disorders, flexibility, removing blockages, taking our personal power and for elegance. It strengthens the physical body, opens all our chakras and helps us accept divine universal timing.

Cinnabar is great for amplifying what you are manifesting and brings money to the holder or cash box. Since Cinnabar is toxic, a good way to work with it is by gazing at it during meditation. The pressure from gravity is more than enough to activate the energies in these crystals. Or, make a gemstone elixir using the alternative method. Place the Cinnabar in a jar and place that jar in another jar that is filled with water. Let it absorb the sun or moon rays for a full day and you will have your Cinnabar elixir. Have fun!