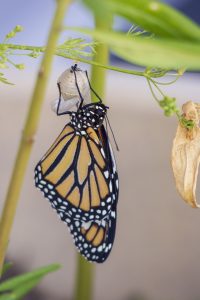 Like a butterfly, life changes from one life experience to another. G. EscoDavis

Most humans don’t like change — you would say, “Why should I change; things are okay the way they are.” Even when you are not pleased with the way things are or situations are unbearable, the fear of change is more fighting.

For the butterfly to achieve their life’s purpose, they must release the outer skin — the cocoon.

My doctor’s office computer systems were antiquated at best. The team constantly complained about it. The doctors realized that a change was in order. So they purchased new computers — new systems, programs, and six months of training for the whole team. Was the team happy? Not in the least. Complaints ensued daily. After a year the team loved the new system. It was streamlined, saved time, and was more efficient.

Change is a part of life. Just think about when your normal routine driving to and from work is altered due to roadwork — we are averse to the inconveniences, however, we complain about the conditions of the roads. Change is inevitable and is all around us; our bodies change daily, and our situations change.

Take our skin for example, “The old skin has to be shed before the new one can come to the surface,” noted Joseph Campbell, Todd Falcome and Diane K. Osbon, the famous teachers of mythology, referring to the ancient symbol of snakes shedding their skin as a metaphor for inner growth. Our old skin must die before we can enter into our next stage of growth. Change is a phenomenon of nature for inner growth.

A young man I spoke with a while ago had been heading toward a life of social success, just as his parents had hoped. He was self-absorbed and not kind to people. After suffering a horrific concussion while playing football in college, his whole life changed. For months he couldn’t cope with the reality of his state; he couldn’t remember things and couldn’t do anything without assistance. There were many opportunities to improve his way of life, but he dismissed them time after time.

After his injury, he began to step back from the way he was to rethink the life he was tossed into. That’s when he realized the injury was his awakening to a different, more fulfilling life. He needed to abandon the life he had, shedding the old skin. To understand the spiritual purpose of life became a compulsion, something he had to learn. His injury freed him to shed his former self, realizing the greater gift of his injury.

The teachings of mythology note that snakes periodically discard the outer portion of their skin; this event is a hormonal control and is associated with growth, an evolution.

It is also a natural part of life to grow out of our former self for inner growth. You may no longer play with baby dolls or toy trains. You have outgrown desires to do so. To be the person you were born to be, you must release the old and let those God-given natural evolutions happen. To become a beautiful butterfly, they must release the cocoon.

The lyrics of a song by Quincy Jones makes it clear. It goes like this:

There are not many things in life
You can be sure of, except
Rain comes from the clouds
Sun lights up the sky
And hummingbirds do fly

It’s springtime — your wings are ready to fly!