Back in 1993, a handful of farmers began selling produce from their trucks in the parking lot in the Village Commons Mall in Farmington. Then in 1996, with encouragement from Market Master Walt Gajewski, a planning partnership between the city and Wayne State University was formed. This committee envisioned the farmers’ market as the focal point for downtown Farmington. In October 2005, construction of the pavilion completed and opened as the new 30,000 square foot Farmington Farmers & Artisans Market.

Every week, 40 or more vendors, including 15 local farmers, provide fresh products grown within 400 miles of Farmington. From produce to artisan crafts, to children’s activities and weekly live entertainment, to delicious and hot apple cider doughnuts, it’s no wonder why Farmington receives 80,000 visitors each year. Cooking demonstrations make the market even more appealing to visitors.

“We have a chef’s series called, Cooking in the Market,” says Gajewski. “For example, John Cowley & Sons was at the market with a generations-old family recipe demonstrating Irish potato soup. One of the great things about our market is that there’s solidarity amongst all of the vendors,” adds Gajewski.

MCCOY FARMS
Mark McCoy, his wife Donna and their son Steve grow a variety of certified organics including arugula, spinach, organic eggs, and hay throughout each season. They have an 80-acre farm in Imlay City where they grow through 54 acres of hay and 3 acres of vegetables. 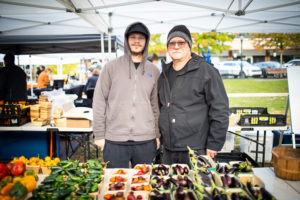 “The market has a good crowd, and the numbers are usually very high,” Mark McCoy says. “It seems like a lot of young people like us too; they buy a lot of our salads. Being the only certified organic vendor here, people look for us.” Though the McCoy’s are in their second year of selling USDA certified organic produce at the Farmington Market, they’ve been in business for seven years. “People come out to our farm every year, and they inspect our chicken coops, our farm, our barns, our water, everything. It’s a big process,” he says.

ROSE BEST LLC
Zehra Bhinderwala from Farmington Hills, sells all natural soap products as well as natural body butter, foot scrubs, lip balms and relaxing eye masks. Some of the ingredients in her products are cocoa butter, avocado oil, beeswax, and other naturals. 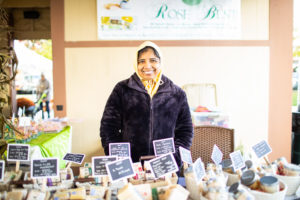 Rose is one of the more popular soaps, which is intended for full body use. “Even though people think rose is strong, it’s the best for the most sensitive skin,” says Zehra. “My body butters help heal cuts and my clients include doctors who love them. It is a wonderful feeling to see people enjoy the soaps.”

Bhinderwala’s entrepreneurial journey began when she started making soaps in 1998 with a group of friends and was encouraged by her sister to continue making them. She eventually marketed her brand and has had a great response ever since. “I’ve been selling at the Farmington Farmers Market for seven years, and it’s great to see my repeating customers say how much they enjoy the products,” says Zehra. 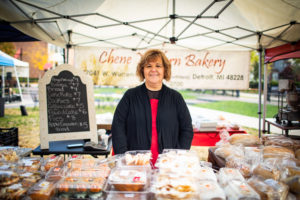 Janice Maksimovski specializes in Polish baked goods, cakes, and other sweets, and operates her bakery in Detroit. The items for sale are always made the night before so that patrons can count on fresh, flavorful sweets from her stand. “Our popular items are everything pumpkin, poppyseed and also our Chrusciki (angel wings),” Janice says. “We are a regular bakery with everything in it, and we specialize in cakes.”

CHEESECAKE ETCETERA
Plymouth resident Michael Bradford has been selling savory and sweet cheesecakes at the Market for six years and says it has been a great business. “It’s great because it’s a low startup cost so that you can test your idea,” Bradford says. “It’s not much to lose if it doesn’t work out. Also, the Farmington Market is very well run and has a nice variety of vendors. Some farmers markets are like a craft show, but this is more focused on the farmers.” 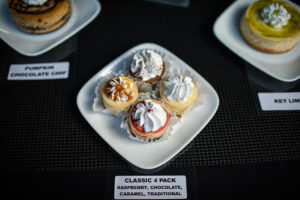 Patrons who purchase Bradford’s items receive the cheesecakes in frozen form, which are stored in a large Igloo cooler at the market. “People love it. I love it too, but the funny thing is I never liked cheesecake until I made it. I was like, ‘Oh this is how it should taste’, versus the commercially produced stuff. Our four packs are very popular because you get a variety, such as a combination of pecan pie, apple caramel, pumpkin, and chocolate mocha. There’s something for everybody,” Bradford says.

UHLIANEK SPECIALTIES FROM THE FARM 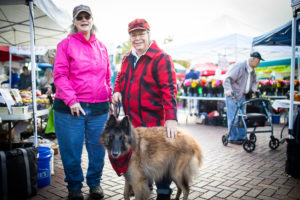 Lee Uhlianek, from North Branch, MI, continues his family’s 55-year, multi-generational tradition of selling products at farmers markets. “My grandparents came over from Russia and farmed, and we’ve been farming, we’re the third generation, and my son Ben will be the fourth generation,” says Lee. “He just turned 12.” 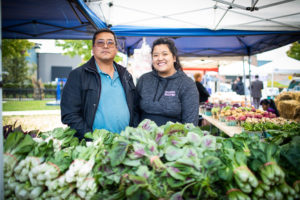 Tou Xiong and his daughter, Jessica, are from Emmett, MI, and say their produce is better and longer lasting than store-bought produce, which is usually imported from out of state farms. “The vegetables that I put here I picked yesterday and sell today,” says Tou. “People taste it, they like it, they take it home, and the shelf life is longer. It lasts for about two weeks in the fridge. You can truly taste the flavor of it.”

SCHULERT FARM
Travis and his wife Maranda Shulert work from their farms in Jackson, MI, and go by their motto, “No-till, no chemicals, no-nonsense.” They use permadynamics methodology which includes using no fertilization, amending the soil with food from microbes, and fighting pests with beneficial insects. “Our microgreens are very popular. Our flowers, veggies and lettuce mix are also big sellers,” Maranda says.

What is Your Worst Fear?