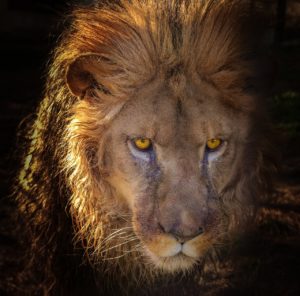 When I think of courage, I think of a lion. Is it because of the Wizard of Oz? Lions and Leos reign over August, and Leo rules the heart. To have courage we have to dig down deep. It’s breaking up with someone or leaving a company we’ve worked at for years. Courage is tending to the small fire inside a dark night of the soul, not really knowing how sitting and praying by it for strength and help. For a sign.

It’s choosing to go on alone. It’s riding out the storm, all wrapped up against the wind and rain, and pain, knowing eventually that it will pass, but when? It’s holding the torch when it seems as if we’ll never see the light of day, or feel a sliver of hope for the future.

But sorrow’s swallowed tears ferment, to become the finest and most blessed vintage of a season or a century. Courage is having to do things such as setting boundaries and saying, no. It’s sometimes disappointing people that we care about. It’s firing someone, and disciplining children, wishing they could see it’s in their best interest. It’s superhero/heroine sized courage that fights disease, maybe once, twice or three times. It’s Malala Yousafzai’s fearlessness, who got shot in the head just because she wanted to go to school.

Courage is never easy. Even seemingly smaller acts of humility such as apologizing, or choosing not to react when someone has said or done hurtful things, can feel like anything but courageous and more like eating humble pie. Once we take that first brave step, the future has just opened up a whole new set of possibilities. This life will bring the sour and sweet. Pain and pleasure. But courage shall reign throughout it all.