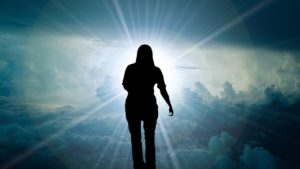 It is an inevitable journey that we all take at some point. This may seem like a solemn or even scary subject to some, but the truth is that it is a beautiful path back to who we really are. Of course, we all feel the great emptiness and loss when someone we love moves on to the other side. But have we really lost them forever?

It is a very difficult time for anyone left behind, but if you allow yourself to let go of grief for a moment and instead allow love and happiness to fill your soul, you may experience your loved one reaching out to you; through feeling their presence or possibly seeing them, or even hearing your loved one letting you know that they are still here and have never really left you. Mediums are not the only ones who can allow the veil between this world and the heavens to open and let communication flow through. A profound question echoes through all of us; What happens when we die?

First, let me share with you that I have been physically dead in this lifetime, in fact, more than three times while recovering from a surgery back in 1986. What we did not know at the time is that I have four clotting disorders and should have been on heparin after my surgery. I made it through the surgery fine and then was moved to a room on the general patient floor; what happened next confirmed to me that there is no doubt we continue after our body dies.

Apparently, I experienced a pulmonary embolism which traveled through my heart and lodged itself into my lung. This PE was the size of a quarter if you can imagine. An amazing story followed, however, I will jump to the important part of the story — “I Died”.

My soul rose up to the top of the room where three spheres of glowing light were hovering at the ceiling as if they were waiting for me. I did not feel anything except awe at this experience and felt peaceful joy. I was fully aware of the medical team and my doctor working feverishly to revive me. I was later told that more than an hour passed from the moment they ran to my side during the code blue, to the time they called my death. My dear doctor worked so hard on me as he knew I was only 33 years old and had two children who needed their mother.

While all that was going on, these glowing balls of light transferred a wealth of information and told me that they had a mission for me to complete and that I needed to return to my body. To sum up a bit of the information that they transferred to me: “Tell everyone that there is no real death as we believe. We are not physical bodies. Our true self is energy much like the glowing balls of light that met at the ceiling; instead we move into another dimension.” The rest of the information gives the details of the true purpose and describes the dimension that we come from.

Returning to my body, my doctor was exhausted and had tears in his eyes as he tried tirelessly to revive me for more than an hour. He had already called my death and everyone else had left the room. Suddenly, I opened my eyes with a big smile as if nothing had happened to me. I said, “Thank you, Dr. Steward.” He later told me that he saw a mist of light enter back into my body and was waiting to see if I would return.

Dr. Steward came to my bedside a few days later after I was downgraded from ICU. He asked me what I remembered about my journey to the other side…

Part II to be Continued in the September 2019 BMSG issue