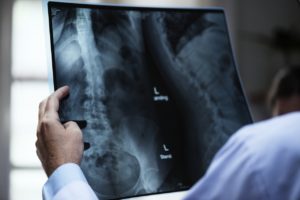 Next month we celebrate Chiropractic — one of the most important finds for mankind. Why is it so important? The early survival of our species was based upon strength as well as the ability to think and function efficiently when facing challenges. Chiropractic evolved to help people continue meeting the challenges of our constantly changing world. Today, chiropractic helps many people restore function and live healthier lives while maximizing their abilities and potential.

Chiropractic has been around since the beginning of time and developed in many places in various ways. It’s difficult to provide a comprehensive definition of chiropractic because there are so many variations within the field. Holistic chiropractic care was developed to rebalance the body in all aspects including things physical, mental and emotional.

Chiropractic as a specific science, art and philosophy began in 1895 in Davenport, Iowa, based on the work and research of physician, D.D. Palmer. Dr. Palmer was looking for a better alternative for treating illness and eradicating disease besides injecting patients with heavy metals such as mercury. His accidental discovery became the foundation for modern-day chiropractic techniques.

This historical discovery took place while Palmer was examining a patient who happened to be deaf. He noticed that when pushing on the bumps on his patient’s spine, they disappeared and often made a popping sound. The next day the man’s hearing had returned! This was a time when the research wasn’t quite as thorough as it is today, so Palmer’s technique was advertised as a cure for deafness. Not all patients had their hearing return but many had other illnesses diminish or completely disappear after years of suffering.

D.D. Palmer’s son, B.J. Palmer, was the researcher, writer, and genius that figured out how this method of healing worked and codified a system of doing it. He also ran the school to teach others how to practice this amazing system of healing. B.J. Palmer also employed scientists and MDs to discover how the body worked and to help make the practice of chiropractic more exacting.

D.D. Palmer wasn’t the first or the last scientist to propose a theory and be jeered at by peers. However, his early discovery took place in the early days when all physicians worked together for the good of the patient. These were good days for everyone. The dark days came later when the fear of lost power and money caused some of the political aspects of medicine to attempt to cripple and destroy this new Chiropractic profession.

Another of D.D. Palmer’s methods involved the use of magnets which also brought disdain from the proper scientific community. What’s especially interesting about this is that magnetics and electromagnetic frequencies are now utilized in cutting edge mainstream health care. Pulsed Electro-magnetic Field Therapy (PEMF) is a great example.

Much of the early fame of chiropractic resulted from successfully treating people during the Spanish Flu epidemic — not just from fixing sore necks and backs. Many people were dying and others had little hope of recovery with conventional medicine. Chiropractic utilized the power within the body (rather than outside the body) and was more successful than mainstream medicine during this horrific time in history.

Next came the Tuberculosis epidemic that left people in a horrible contraption called an iron lung. Some people were able to stay alive by breathing through this machine. Luckier ones were freed from this fate through the use of chiropractic techniques. However, it was miracles such as these that created fear and generated misinformation about what chiropractic is and does.

Misinformation was not a new vice for trying to stop alternative ways of thinking and/or healing. It was employed in the Salem witch hunts to stop women from finding natural cures to help with some of the problems that mainstream medicine was unsuccessful with during that time. In today’s world, alternative health care that helps without doing harm is invaluable — but we must all do our own research and make informed choices. Some companies spend more on advertising than their research and/or even their products.

Many chiropractic practices of the past are still utilized today. Ongoing research provides an ever-deepening understanding of how the body works and why it responds to chiropractic care — but Doctors of Chiropractic do not take credit for healing that occurs after adjustments. The chiropractor’s role is to facilitate the body’s innate ability to heal by removing interferences.

Despite different chiropractic styles, the common goal is to remove communication interferences within the body. After these interferences are cleared, functioning improves. Functioning often improves immediately and continues improving as healing takes place. (Drugs, alcohol and cigarettes slow the nervous system response and result in longer healing times.)

Specific exercise programs also help stabilize the gains made while under chiropractic care. Without proper exercise and nutrition, many of the newfound health gains through chiropractic may disappear, especially if stress is involved.

Chiropractors use many different tools to support the body’s own ability to heal. Drugs and surgeries come with altered health and side effects but are sometimes necessary. When surgery is needed, chiropractic care is still indicated to provide support throughout the process.

Enlisting the guidance of a holistic chiropractor to assist you in becoming proactive with your health is one of the soundest investments you may ever make. You have an amazing body so why not start taking care of it?