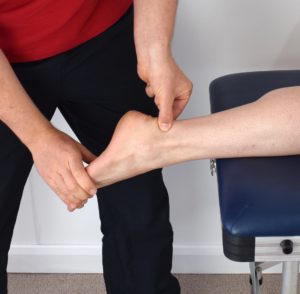 A while back, Jeff, a client of mine in his mid-forties, came to me shortly after suffering a severe strain to his right ankle while doing yard work. As it turned out, this was only the latest in a series of sprains to the same ankle. During the healing process, his body’s structure began to compensate for the injury. Since his foot had turned under, the compensations included the tightening of lateral calve muscles and the IT Band (a stabilizing band of thick connective tissue running between the knee and the hip on the outside of the leg) on the injured side. This challenged the integrity of the inside plane of his leg, reaching from the inner ankle all the way up to the floor of the pelvis, and contributing to one hip being higher than the other. In turn, his gait had become distorted in a way that anchored in new imbalances into his body.

The body’s prime directive to avoid pain had Jeff limping, hopping and doing whatever he could do to avoid putting weight on an injured ankle. Long after his ankle had “healed”, the ghost of the limp lived on. Additionally, the connective tissue that his body built up around the injured area to protect his ankle, functioned like a cast. This limited his movement and flexibility that needed to be restored.

As a result of his body’s imbalance, he started to repeatedly twist the same ankle. With each sprain, Jeff was compounding the factors that would lead to the next sprain. By the time I saw Jeff he had already taken some serious falls.

Injuries to the ankle are common. They can occur when a person steps off a curb, stairs or simply stumbles while walking. In fact, a badly sprained ankle can take longer to heal than a fracture. Mayo Clinic reports that annually there are over 3 million cases of sprained ankle injuries in the United States.

Health experts suggest that lack of conditioning is one of the most common causes of ankle sprains. If your muscles, tendons, and ligaments around the ankle joint are weak, this can make a sprain from a bad landing more likely.

According to Medlineplus.gov, “A sprain is an injury to the ligaments. It may take a few weeks to many months to heal completely. A fracture is a break in a bone. You can also injure other parts of the ankle such as tendons, which join muscles to bone, and cartilage, which cushions your joints.”

From a Rolfer’s perspective, part of this problem is the different types of compensations the person’s body attempts to make while walking. These are set into motion by the imbalanced foot trying to compensate for the pain from an injury or weakness that lingers long after the incident. This patterns and directs the ground impact force that comes which each step we take and tends to add fuel to and reinforce structural imbalances higher up the body.

Typically, after an ankle has been damaged, the foot tends to externally rotate and turn out or less frequently, turn in.

The body’s weight on an injured ankle has a tendency to go to either the inside or the outside of the foot, depending on the location of the sprain. Whichever way it goes, it begins to create an unhappy relationship with the rest of the body. This is just an exaggeration of what most of us have observed in the uneven wear of the soles of our shoes.

Our goal was to reestablish balance to the entire foot. This required reestablishing the balance of the entire body, including, as in Jeff’s case, balancing his hips, so that equal weight was distributed through the whole foot of the injured ankle and that the body’s weight was being distributed as equally as possible between the left and right feet.

My approach with Jeff was to take him through the Ten Step Rolf Structural Integration program. In addition to that, I assigned him a number of Rolf movement exercises to reinforce the treatments and engage his core.

What we were able to do was to help his body naturally heal and regain strength and flexibility in the injured areas as well as resolve compensations.

As a result, he was able to regain his form and balance over a period of time.

So, in summary, injuries to the ankle need to be addressed in a holistic manner, rather than treating the injury in isolation. Doing so can ensure a much more complete and total healing of the injured ankle and the body’s return to full balance.