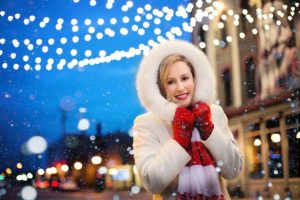 The holidays are coming faster than a freight train down an icy mountain track which can be both scary and exciting. Some people might compare the holidays to being on a fast toboggan, occasionally an uncontrolled one heading towards a tree, wondering how that tree got in their path. Yep, stressful!

Thinking how important immune health is at this time of the year, I imagined writing about what to eat, what to avoid, etc., to stay healthy. How we nourish ourselves is obviously important, but how we view stress is even more important.

Our earliest ancestors had stress. Their stress was likely based on encountering something wanting to eat or harm them. When facing a dangerous creature, all their energy was directed towards staying alive. Similar to us when we’re stressed, their heart rate and breathing increased and other bodily systems shut down temporarily to have more energy to fight or run. Similar to those experiencing stress in today’s world, the most affected systems were their digestive and immune systems. It wouldn’t matter if our food wasn’t digesting or we were getting a bug if we got eaten by a tiger!

In the very beginning, our ancestors had only basic knee-jerk responses like, “fight or flight.” It’s likely that they started experiencing stress whenever they heard the tiger. As they started figuring out how to outsmart their predators, the prefrontal cortex in the frontal lobe of their brain (the area involved in thinking, reasoning, and non-reactionary decision-making) began to develop and increase in size. Despite the evolution of rational abilities, our primitive brain still exists within us, often directing some of our emotions and decision making. FYI: The less fully conscious you are, the bigger the influence of your primitive brain.

Today our greatest predators are microbes, not tigers. Here again, is where our primitive brains will run the show if we allow it. Even if we know we truly have nothing to fear, we go into “fight or flight” which results in a shutdown of our immune systems and digestive systems.

Have you ever heard someone say that if you’re around someone who’s sick, you’ll catch whatever they have? This idea was promoted by Louis Pasteur after discovering that the wrong bacteria made bad wine. Pushing this idea onto everything else, he probably would’ve been a good modern-day multi-level marketer. The point is that if you’re around a sick person and are afraid of “catching “ whatever they have, you will shut down your amazing immune system and most likely get something – which is usually whatever invader is most plentiful around you.

Let’s think about this: There’s always a myriad of bacteria around us. Thank heaven as most of them keep us alive. While there are some bad bacteria, they’re being kept in check by the other good ones. Unfortunately, many people are deathly afraid of bacteria and they think they’re all bad. Perhaps referring to good bacteria as “pro-biotics” will help more people overcome their fear of bacteria.

Some people are so afraid of bacteria that they scrub everything in the environment, as well as every part of their body, with anti-bacterial soaps. Will these soaps kill all of the bacteria? Although they will kill many, they won’t kill the most dangerous ones! They’ll be left to fill in the spaces left by the good guys that were wiped out with nothing to keep them in check.

Hospitals are in a constant scrub downstate, yet they house the worst of the bad bacteria and viruses. Perhaps you know people who picked-up something while in a hospital that’s nearly impossible to get rid of. This is where many of the superbugs that are antibiotic-resistant got started. The good news is that it’s not completely scary because your immune system works in miraculous ways. Our immune systems aren’t dependent on antibiotics that may not work. However, taking antibiotics when they aren’t needed will weaken your immune system. Important note: If your immune system is in a highly weakened state, then yes, use the antibiotic to survive. Afterward, you can get your body stronger to fight the next battle.

The immune system is a multilayered system that, when functioning correctly, doesn’t care if it’s a superbug or just a little guy. The point is that it’s best not to go around being afraid of things. We shut off our immune system when we’re afraid. It’s also better not to go around making others fearful as that could contribute to making them sick. There’s an axiom in this part of the universe that states that “Only what you fear will come upon you. When you no longer fear it, it no longer has any interest in you.”

How does all this fit with staying healthy during the holidays? It’s all about making good choices. For example, when presented with several wonderful looking treats don’t say, “Oh no! I couldn’t eat that toxic mess. It’s full of refined sugar and chemicals!” That’ll make sure you’re never invited back and possibly never spoken to again by your host. This would be a very bad choice of words, especially if your host is your boss or mother-in-law. (And you may want to try some of it anyway.)

Be smart, make good choices and use common sense. Bring some of your own things to eat without acting like you’re the food guru. If it’s good, other people will want to try it. If not, it just means there’s more for you!

Next month we’ll talk about more nutrition to boost your immune system. Until then, take time to relax, enjoy everything the season has to offer, love each other and do something to make a positive difference in the world. Lastly, bring magnesium to your holiday parties to block the MSG in all its forms and Celtic salt to help protect you from refined sugars and table salt.