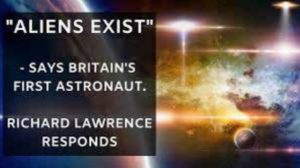 International bestselling author Richard Lawrence believes we have been visited by cosmic intelligences throughout our history. Among them, he says, are some of the greatest spiritual icons ever to be born upon Earth. Here he reveals the cosmic plan behind the coming to Earth of these avatars and gods from past millennia up to the present day.

“You shall behold your brothers in the celestial region. They have reached it before you. Indeed, you shall see all of them there, with Krishna.” These words were spoken by the god, Indra, according to the ancient Hindu text, the Mahabharata, when he invited King Yudhishthira to travel with him on a space vehicle (vimana in Sanskrit) which “ascended quickly, causing the entire sky to blaze.” This is surely a clear indication that the avatar or divine incarnation, Sri Krishna, was, in fact, a cosmic intelligence.
Thousands of years later, another bright light was seen moving across the sky by three learned men. It led them to a stable in Bethlehem where, according to scripture, Jesus was born. It is little wonder that “they rejoiced with exceeding great joy,” according to the Bible because they believed that this was the coming of the son of God. And so a being, who epitomized the very essence of true love, walked the Earth.

Another son of God – or Zeus, as he was referred to in ancient Greece – was Heracles. He lived at a time when, according to the Roman poet Catullus, “The sky-dwellers in person used to visit the stainless homes of heroes and be seen at mortal gatherings.” Stripping away the superstition from the myth and the sentimentality from the Hollywood legend, we are left with a superhuman figure in both physique and character, who would be revered for centuries to come.

The superhuman qualities of Sri Shankaracharya were evident too. From his early childhood in the eighth century India, so outstanding were his spiritual and mental faculties that he became a teacher, with devoted disciples, at the age of only 12 years old. Throughout his life, he studied, realized, taught, and lived the wisdom of the Rishis, the enlightened Masters who inspired the ancient Hindu scriptures. Even before his birth, his parents had been prepared for his coming by the god, Shiva, who appeared to them both in a dream.

Centuries later, in a different region of India, another parent was prepared in a dream for a divine birth, this time by the god, Vishnu. Just as Joseph had dreamt that he had received a sacred visit before the birth of Jesus, so too did the father of the Hindu saint Sri Ramakrishna, who would enter the highest states of consciousness possible to attain upon Earth, and become the guru of the great Swami Vivekananda among others.

There is a pattern of divine revelations surrounding the coming of an avatar or god. The Virgin Mary was contacted directly by an angel of the Lord before she conceived, as was the mother of Samson, who had been considered infertile. Despite this, she was told to prepare for the incarnation of a son with a mission from above. Like Heracles, Samson would combine phenomenal strength with complete devotion to his holy task.

It is written that the mother of the Lord Buddha, Queen Maya, also dreamt that his would be a divine birth. So concerned was her husband that his son would pursue the spiritual destiny which had been foretold by his court astrologers, that he tried to shield him from all contact with human suffering. He failed to do so, and his god-like son went on to demonstrate and teach one of the greatest paths of freedom from personal suffering through peace and enlightenment, which has ever been given to Earth.

At another court in an earlier time, a Hebrew child was raised by the Pharaoh’s daughter after being rescued from a river. He, too, would discover the suffering of his fellow man and fulfill a mission of salvation under the direction of divine guidance. The exodus led by Moses was accompanied and assisted, we are told, by objects seen in the sky. These were given various descriptions in the Bible, including clouds, but they were no ordinary clouds. Scripture records that the Lord and even Moses traveled in them, just as Jesus would do later – another indication of the cosmic origins of such divine emissaries.

Little, if anything, is known for certain about the birth of some, such as the Chinese sages Lao Tzu and Confucius, and the father of Raja Yoga, Sri Patanjali. Others may have lived upon this planet without any public recognition or knowledge to perform their prescribed tasks. But they could all be described as avatars or gods, born through the wombs of Earth women, for a divinely-ordained purpose which was required at a particular time and place.

It was the great western master of yoga Dr. George King, my personal teacher and very close friend, who first explained in-depth this concept of the cosmic avatar. And he should know because although he never said so in public, I am convinced that he was one himself. I was privileged to co-author the last book he published in his lifetime, Contacts With The Gods From Space, and he did not wish to disclose it then. This was partly because of his innate humility and desire to focus upon other Masters rather than himself. However, I feel sure that now this revelation can and should be made.

His mission was to become a channel through whom the gods from space would speak to Earth. Between 1954 and his passing in 1997, he was their voice. As someone who was in touch with him almost every day for the last 20 years of his life, I can vouch for the fact that he was always on call for them twenty-four hours a day. Dr. King was not the only cosmic avatar of the 20th century – another I believe was Mahatma Gandhi – but his was the challenging and controversial task of giving the interplanetary message, which he did through the organization he founded and which continues today, The Aetherius Society.

In 1959, Dr. King entered a deep meditative trance on BBC television and channeled the following words from a cosmic intelligence named, The Master Aetherius:

If we followed this advice, it would be a different world tomorrow, and the untold sacrifices of the avatars and gods who came to Earth would, at last, be honored by those who profess to follow them.

Richard Lawrence is an international bestselling author and presenter who has frequently appeared on TV and radio worldwide. He has been featured in numerous magazines and newspapers internationally. He was described by Kindred Spirit magazine as one “of the biggest talents in MBS.” Richard is the Executive Secretary of The Aetherius Society for Europe and Africa, which is the oldest UFO contact organization in Britain and possibly the world. Visit: www.richardlawrence.co.uk